With the understanding that communication is the heartbeat of all democratic societies, the Annual Conference on Media & Democratic Governance was conceived in 2011 to explore the intersection between journalism and public policy and in particular media‘s impact on democratic governance in both emerging and advanced democracies.

For a decade, the Center for Media & Peace Initiatives (CMPI) has partnered with the School of Public Affairs and Administration (SPAA) at Rutgers University Newark to host the Gershowitz Conference on Media and Democratic Governance. SPAA/CMPI sponsored workshops, conferences are among the leading intellectual events of its kind – an occasion for experts in media and public policy to present serious lectures to an audience of some 200 guests – after they have enjoyed about an hour of networking. Guests look forward to the hush and silence of a packed room of colleagues and different professionals taking in the thoughts and experience of journalists, academics, and public administrators that inspire and mobilize citizens, students, and the academic community on evolving issues in journalism and public policy. 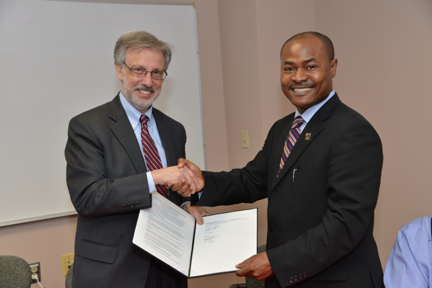 The Center for Media & Peace Initiatives (CMPI) designs, produces, and manages an innovative program of high quality seminars and conferences which promote the sharing of knowledge and information, create opportunities for learning, and contribute to the development of people and organizations at all levels.

The Gershowitz Conference is annually hosted jointly with School of Public Affairs & Administration, Rutgers University in Newark, New Jersey often takes place during the Spring Semester. The forum explores the intersection between journalism and public policy and in particular the impact of media on democratic governance in emerging democracies and advanced democracies. The conference series was launched in April 2012.

International Media Summit on Reconstruction of Journalism
Many people doubt what they read and hear in the news. In the United States, for example, a 2012 Gallup poll asked people “how much trust and confidence” they had in the accuracy, fairness, and completeness of the news reports of newspapers, TV, and radio. The answer from 6 out of 10 people was either “not very much” or “none at all.” Is such distrust justified? Many journalists and the organizations they work for have expressed a commitment to producing accurate and informative reports. Yet, there is reason for concern.

The conference focuses on the changing demands on and of journalism in the twenty-first century. The summit which attracts participants from all over the world is a response to the declining standards in journalism practice, intense partisanship in media coverage in United States, and other failures of the news media. The continuing challenge of reporting in the digital age in which the definition of information, news, and views continues to shift regularly is addressed at the summit. The inaugural summit was launched at the United Nations.

Conference on Conflict Resolution and Peace Building
Under its Bridging Cultures Initiative, the center hosts conferences to explore the challenges of cultural differences in the world. In the era of dispersal of cultures and heightened immigration into the United States, CMPI through discussion, debate, and case studies attempts help Americans and non Americans make sense of the great variety of cultural influences on, and myriad subcultures within, American society. The Center launched Hudaibiyah Peace Project to bridge understanding between Muslims and other faiths. The conference goal is to create a platform to reduce stereotype and labeling of different religious groups.