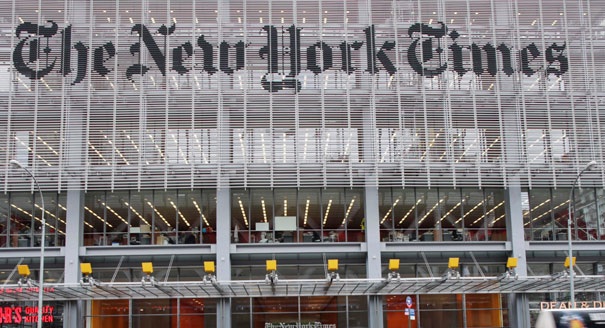 The executive editor of the New York Times is disputing an accusation of liberal bias made by her very own public editor, Arthur Brisbane.

In his final column for the Times, Brisbane wrote that his fellow staffers “share a kind of political and cultural progressivism” that “virtually bleeds through the fabric of The Times.” Brisbane even argued that Times reporters approached some liberal issues, like gay marriage and the Occupy movement, “more like causes than news subjects.”

“In our newsroom we are always conscious that the way we view an issue in New York is not necessarily the way it is viewed in the rest of the country or world. I disagree with Mr. Brisbane’s sweeping conclusions,” Abramson told reporters.

“I agree with another past public editor, Dan Okrent, and my predecessor as executive editor, Bill Keller, that in covering some social and cultural issues, the Times sometimes reflects its urban and cosmopolitan base,” she continued. “But I also often quote, including in talks with Mr. Brisbane, another executive editor, Abe Rosenthal, who wanted to be remembered for keeping ‘the paper straight.’ That’s essential.”

Brisbane declined to comment on the column, his last as he concludes two-year tenure as the paper’s in-house critic. “I would rather let the column speak for itself,” he said.

Elsewhere in his column, Brisbane championed the paper’s investments in journalism in print and on the web, even as he cautioned reporters about their use of social media outlets. Brisbane also charged the Times with being insufficiently transparent, despite efforts to increase transparency in recent years.

But the public editors’ most remarkable comments pertained to the charge of liberal bias — a rare shot at the paper from within its own ranks.

“When The Times covers a national presidential campaign, I have found that the lead editors and reporters are disciplined about enforcing fairness and balance, and usually succeed in doing so,” Brisbane wrote. “Across the paper’s many departments, though, so many share a kind of political and cultural progressivism — for lack of a better term — that this worldview virtually bleeds through the fabric of The Times.”

“As a result, developments like the Occupy movement and gay marriage seem almost to erupt in The Times, over-loved and undermanaged, more like causes than news subjects,” he continued.

Is Nigeria a failed state?