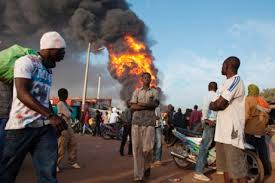 Tensions in the Sahel might break out into a war.

A suicide bomber vehicle exploded in Northern Mali at a UN peacekeeping base Wednesday afternoon killing three and injuring at least 16. According to local news reports, the bomber was shot before entering the UN base at Ansongo, but his vehicle exploded nearby.

UN peacekeepers victim to the attack, reportedly from Niger, were part of  MINUSMA, a 9,000 member peacekeeping force sent in over the past two years to replace French forces. The former colonial power had stabilized the area after extremists and rebels overtook about two-thirds of Mali’s territory.

The attack flared as peacekeeping talks progress in Algeria between the Malian government based in the southern city of Bamako, and rebel groups in the north, that express grievances over neglect in development initiatives and under-representation in government.

The attack comes just shy of four months after a similar suicide bombing in the West African nation’s arid north — this one directed against the National Movement for the Liberation of Azawad (MNLA), a rebel group advocating for the Tuareg ethnic group. January’s attack is rumoured to be the work of the pro-government Gatia militia, perhaps in conjunction with AQIM, which has perpetuated unrest in the region.

But amidst an environment of interweaving and rupturing alliances among government, local military, international peacekeeping forces, Tuareg rebels, AQIM, and other extremist groups such as Ansar Dine or the Movement for Oneness and Jihad in West Africa (MUJAO), pointing fingers is a complex game, and the cycle of violence stems from long-rooted grievances after the liberation of Mali from France in 1960. Today, total allegiance becomes harder to determine as individual rebels seeking payoffs from one group or another jump ship and tides of new unrest trickle across the Sahel from Libya.

But understanding the interplay among the groups is pivotal to ending a disturbing trend of suicide attacks from all sides.

CMPI seeks to untangle the threads. Check back for updates on the situation in Mali from