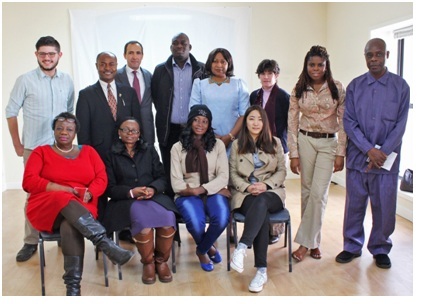 As the world grapples with the endless search for kidnapped 263 Nigerian girls one year ago, Staff Writer, Hyewon Lee recalls that Korea experienced similar ordeal at the end of World War II, when about 200 thousands of young girls were kidnapped or sold as military sexual slaves to Japanese soldiers.

Over the decades, women and societies continue to seek the most effective way to emphasize women’s messages.

In most countries, women hesitate to express themselves due to some structural and cultural challenges. For example,  Korea, from 1930’s to 1945, the end of World War II, about 200 thousands  of young girls were  kidnapped or sold as military sexual slaves to  Japanese soldiers. They had to be raped by 10~15 or more soldiers every day. At the end of the war, most of them couldn’t go back to their hometown because at that time in Asian countries, losing virginity was the most shameful thing. They couldn’t get even married or pregnant because their fertility was ruined.

Although this represented a dark history of Korea, it was exposed to the public for the first time in 1991 by the late Kim’s testimony, who was one of the victims of sexual slavery. It was about 50 years later since the end of WW2. What has happened during those 5 decades?

The fear factor. Most of the victims were scared of being criticized by the public so they just gave up expressing their stories and desires. Although this is a strong example, similar things are still happening all over the world even till this day. Most women are hesitating to express themselves by raising their own voices because of the fear factor. Sometimes we feel afraid of saying “I’m a feminist” even when we believe that women and men are equal. We always tend to care about the criticism and in some countries people give up the agitation of women’s right publicly.

The most important strategy to overcome this fear is to become brave and willing to accept criticism, and, being creative in finding our own voices. We have to keep paying attention to sexual inequality. That’s why the workshop “Women and the Media” was a valuable forum. At the workshop, participants reported the status of women in developing countries and discussed the way women can express their stories more effectively. Instructors gave the lectures about the effective communication, media strategy, writing skills, newly appearing media aspects and so on. The workshop did not only reveal sexual inequality, but also focused on figuring out the actual solutions to share the stories of women. That represented practical steps towards equality instead of the usual practice of complaining about unequal treatment of women. To keep talking about the problem and striving to find the solution is the most important thing.

Also, women have to keep in mind one more thing: Being creative! Among the lectures, the most interesting one was “Harnessing Creativity” by Dr. Olga Zbarskaya. These days, traditional journalism is still important but it is waning because of the digital and social media. Even New York Times decided to be “digital first” in their NYT innovation report. That’s why women’s voices have to try new strategies and be more creative. Not only just expressing and revealing the inequality, women have to convince the public. Women should make the the society to feel comfortable to discuss the stories we want to share and draw their attention to them. Just recall the ice bucket challenges. Last summer, some celebrities started to record a video of pouring icy water on their head and nominated next three other people. If the person who is nominated doesn’t dump a bucket of ice water on themselves within 24 hours, they had to donate $100 to ALSA(Amyotrophic Lateral Sclerosis Association). It spreads by social media widely and people of all over the world raised huge charity willingly because it was young, creative, and easy to participate.

In the case of military sexual slavery in Korea, discussed earlier, the victims are yet to get any apologies from Japan so far, but there arose a movement to share the stories of the victims. Some young university students founded the organization “Hee-Um” and started to sell fabric products to raise funds. They also gathered high school students and appointed them as “Hee-Um Supporters” and gave them certificates. Supporters started to write the articles about military sexual slavery history and the lives of victims enthusiastically on their blogs and social media. After that, the military sexual slavery could be known to the public more effectively, especially among young people and the victims could get much support. Like this case, when we want to share our stories, we should be more creative and adopt new strategies.

There are still many obstacles that women are facing and it is hard to overcome them entirely. Sometimes it looks difficult for us to let our voices reach to the public. But at least we could find some clues for delivering our ideas more properly from the CMPI sponsored workshop on “Finding Your Public Voice”. That’s why it was a meaningful and strategic forum. . It suggested many methods. This effort to keep thinking about women has to be continued although there would be some obstacles. We have to face it without fear and keep discussing about women’s problems intuitively and creatively.

Hyewon Lee is a staff writer with CMPImedia

The fading influence of newspaper endorsements of politicians