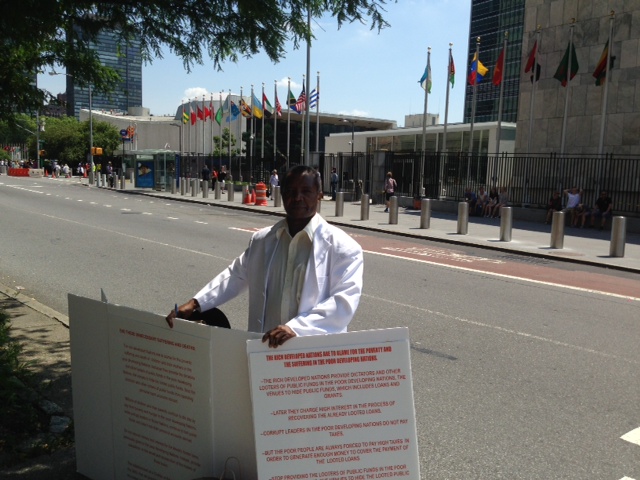 Mr. Kinity is upset that developed economies such as the United States are not doing enough to rein in on leaders of emerging countries to stop the looting of the treasury of poor countries.

Kinity, who traveled from Connecticut to protest in front of the United Nations in New York is convinced that corruption persists in poor countries because of the collusion with western countries.

It is in this connection, said Kinity, that United Nations should support the enactment of an international law that prohibits government officials in poor countries from depositing money in foreign bank accounts and/or making investments in rich countries for the duration of their term in office.

Kinity told CMPImedia correspondent that he would camp outside the gates of the UN for 72 hours and planned to deliver a personal letter to United Nations Secretary-General, Ban Ki Moon on Thursday.

Asked how he was going to break through the layers of security to the Secretary-General’s office, the activist maintained that he would deliver the letter even if it means being arrested by the police or UN security.

He was of the view that the time had come for citizens to reclaim their destiny, adding that “we had been docile for too long” even when the victims of corruption are more in population than the perpetrators of corruption in poor countries.

The End of Secrecy?