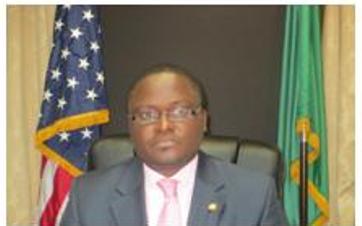 Leading diplomats and ambassadors representing different African countries in the United States have lined up to speak at the conference to mark the 50th anniversary of the African Union, formerly called the Organization of African Unity.

Organized by the Center for Media & Peace Initiatives, CMPI, the conference has as its theme: “Understanding Africa’s Waves of Democracy: Media’s Impact on Global Policy and Perceptions”.

Mr. Palan Mulonda, the Ambassador Extraordinary and Plenipotentiary of the Republic of Zambia to the United States of America will deliver the keynote speech at the conference while the Deputy Permanent Representative of the Arab Republic of Egypt to the United Nations, Mr. Osama Abdelkhalek will speak on the post-Arab Spring democratic challenges underway in Egypt.

Both Ambassadors Mulonda and Abdelkalek have outstanding diplomatic careers. Before his appointment as his country’s top diplomat in the US in January 2013, Ambassador Mulonda served as Director and Chief Executive Officer of the Zambia Institute of Advanced Legal Education (ZIALE) in Zambia, an Institute created by an Act of Parliament to provide training for Law graduates wishing to be admitted to the Zambian bar, prosecutors, legislature drafters and judicial Officers.  From 2007 to December, 2012, Ambassador Mulonda was the Vice-Chairperson of the Zambia Human Rights Commission, a body established to promote and protect human rights and freedom in Zambia.  Ambassador Mulonda was also a law professor at the University Of Zambia School Of Law from 2006 to 2009.

Prior to his current position, Ambassador Abdelkhalek was a counselor in the office of the Minister of Foreign Affairs. He served in the Egyptian embassies in Muscat/Sultanate of Oman, Madrid/Spain, and Addis Ababa/Ethiopia, where he held the position of the Deputy Permanent

Representative of Egypt to the African Union.

Mr. Abdelkhalek also worked in the Department of International Cooperation, in the Office of Egypt’s Permanent Representative to the League of Arab States, as well as in the Human Resources Department. He holds a Bachelors Degree of Science in Architecture from Cairo University, and speaks Arabic, English, and Spanish.

Cote d’Ivoire’s Ambassador and Permanent Representative to the United Nations Ambassador Youssoufou Bamba is being represented at the conference by his deputy Mr. Brouz. Coffi.

The plenary session will also be addressed by Jennifer Dunham, a senior research analyst for Freedom of the Press and Freedom in the World at Freedom House, an independent watchdog organization that supports democratic change, monitors the status of freedom around the world, and advocates for democracy and human rights. Previously, she was the managing editor and Africa writer for a weekly news digest. She holds a bachelor’s degree in history-sociology from Columbia University and a master’s degree in international relations from New York University, where she wrote her thesis on transitional justice in Rwanda and Sierra Leone.

In a statement, the conference coordinator and President of Center for Media & Peace Initiatives, Dr. Uchenna Ekwo noted that for the greater part of the past 50 years, debates on the political and economic problems of Africa had been colonized almost in the same fashion as the African continent was a century ago.

Dr. Ekwo stressed the need for Africans to tell their stories themselves through a media system that respects their values and unique heritage.

The conference, he said, would explore the intersection between media and democratization in Africa; examine ways Africans can capture the democratic momentum in the continent; and develop strategies for Africans to control their narratives themselves.

Culture of Secrecy and Opaque Leadership in Africa

Anatomy of state of journalism today