With eyes set on improving Africa’s standing in the United States, Consuls General of 54 countries of Africa based in New York have formed a common group to speak with one voice on issues related to their diplomatic responsibilities.
At a time when Africa’s integration is on focus, the new regional organization – African Consuls General in New York – represents a strategic move to boost trade and investment in Africa by leveraging the gains of a megacity like New York- the nerve center of finance and diplomacy.
In an exclusive interview with the group’s leader and Nigeria’s Consul- General, Mr. Benaoyagha Okoyen spoke of the benefits of African countries in New York working as a team to successfully establish a unified, common goal, and understand how the various parts of a whole intertwine.
He decried what he phrased as ‘silo mentality’ – a mindset present in some diplomatic quarters that inevitably reduces efficiency, morale, and productivity in achieving Africa’s continental and global policy agenda.
“We may have our differences in language, culture, and national interests as countries, but the fact remains that as Africans we must act as one to be recognized by other powerful countries such as the United States”, said Okoye. 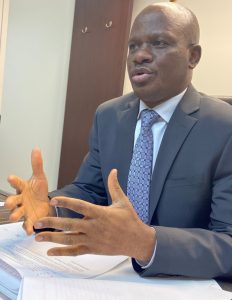 Mindful of a possible perception of duplicating roles with other African diplomatic groups, the Nigerian envoy stated “whatever Africa Union is doing, by implication we are keying into …at different levels of representation of our countries, we have a part to play even as individuals coming from different countries, we have a part to play…so, whatever Africa Union decides to do we continue to project and that becomes part of our engagement strategy. So if we are getting investors back to Africa, it is the same objective telling the world that Africa is the next investment destination.”
The formation of African Consuls General one year after the ratification of the African Continental Free Trade Agreement (AfCFTA) is significant and potentially will boost the operational phase of the trade deal slated to start on 1 July 2020 that will cover a market of more than 1.2 billion people, including a growing middle class, and a combined gross domestic product (GDP) of more than US$3.4 trillion
The Consul Generals have a broad mandate to promote investment and trade in Africa – a continent where poor foreign investment is largely caused by inadequate information on the cost and process of doing business in some countries in Africa.

As part of steps to cement the momentum of the new organization, an international conference on foreign investment and economic development in Africa are being planned for March this year in New York.
The conference will bring together a diverse group of diplomats, scholars, and practitioners from different disciplines (economics, sociology, public administration, political economy, business, anthropology, law, political science, information technology, journalism, education, etc.) to collectively explore the multiple dimensions trade and investment in Africa in the knowledge age.

What’s the connection between hunger and lawlessness?

Abandoned! The uncertainty of the Africa House in New York