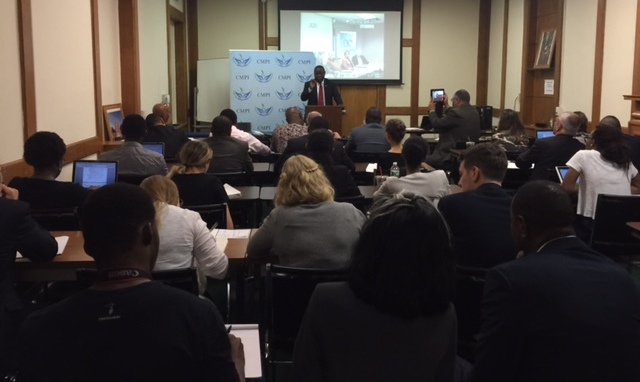 International Criminal Court’s apparent fixation towards Africa amid clear evidence of pervasive misrule and poverty in the continent, the region remains conflicted over the appropriate response to what analysts describe as ICC’s bias to leaders from Africa. ICC relationship with Africa since its establishment in 2002 raises issues about sovereignty and surrender for continent. Africa’s dilemma in relation with ICC manifested itself fully at the CMPI Dialogue in New York organized by the Center for Media and Peace Initiatives as participants appeared divided on whether Africa should withdraw from the international court or concentrate on needed socioeconomic development to pull the continent out from poverty and under development?

In a fierce critic of the court’s performance so far by Dr. Joseph Chilenge, the presiding officer of the African Union’s Economic, Social and Cultural Council (ECOSOCC) questioned the credibility of the court and enumerated several loopholes in the Court’s lopsided interpretation of law.

Chilenge, a diplomat and Zambian trained attorney maintained that Africa’s threat to withdraw from the Rome Statute that established the court was real if the continent’s concerns were not addressed.

He argued that the court remained preoccupied with Africa and failed to investigate equally severe conflicts elsewhere – a trend supported by facts. Since it was formed in 2002, the court has opened investigations in 20 criminal cases in eight African states. It is currently pursuing more cases in Africa than in all other world regions combined.

This disproportionate focus on the continent, in the view of the Africa Union official, threatens Africa’s sovereignty and a sad reminder of colonialism that western powers perpetrated decades ago on the continent.

Dr. Chilenge challenged the international court’s legal interpretation of law and insisted that it was wrong for the court to be the first and final arbiter of criminal cases. There has to be a mechanism whereby alleged war criminals are allowed to appear in lower courts and then to superior courts, he stated.

He emphasized that the court’s process was flawed especially in the choice of judges appointed to the court. According to Chilenge, judges in the court are appointed without consideration to the candidate’s pedigree. “Even in African countries, those who are appointed judges climb through rigorous career path unlike the ICC where the qualification to the bench is based on just a law degree,” said AU ECOSOCC president.

In his presentation, Lawrence Freeman, an American journalist, noted the hypocrisy of Western countries in relation to supporting the court’s affront to Africa and application of selective justice thereby damaging the credibility of the court.

He cited the recent indictment of former British Prime Minister, Tony Blair by that country’s parliament for his ignoble role in the involvement and conduct of the Iraq war, pointing out that if the court was impartial, Blair ought to have  been arraigned before it.

However, Freeman who has reported on Africa for about 25 years, noted that Africa’s greatest need was infrastructure development including provision of electricity to unleash needed economic and social development.

The forum attracted sharp criticism against the court and spirited support for the court. Stephen Lamony, Head of Advocacy and Policy of the Coalition for The International Criminal Court fired the first salvo and attempted to debunk the claims of the guest speaker and AU representative, Dr. Chilenge. Part of Lamony’s argument was that African leaders arraigned before the court merited the court’s intervention.

On the other side of the argument, Omer Dahab Mohamed, Ambassador and permanent representative of the Republic of the Sudan to the United Nations spoke along the line of the guest speaker and repeated the charge against ICC’s interference into the sovereignty of African states recognized in international law. The ambassador’s argument could not be glossed over by other participants especially because the tension between ICC and Sudan’s president, Omar Bashir following ICC’s attempt to arrest a sitting president of a sovereign country in 2009.

Following a spirited conversation and debates from two opposing sides, veteran journalist and publisher of African Sun Times, Dr. Chike Onyeani called for a truce and suggested that instead of clamor over the legitimacy and credibility of ICC, the continent needs to focus on addressing myriad of development challenges besetting it.

Onyeani made an impassioned appeal for Africa’s leaders to be more committed towards changing the lives of nearly one billion people who face unprecedented challenges in terms of fulfilling their yearnings and aspirations in the 21st century.

Earlier, while welcoming the guests and participants to the CMPI Dialogue, Dr. Uchenna Ekwo, the President of Center for Media and Peace Initiatives, who moderated the event, told the audience – mostly journalists, diplomats and civil society groups – that the event was part of the center’s mission of communicating innovative and peaceful solutions to global challenges.

He reaffirmed the neutrality of the center in the debate and announced that similar forums will be sponsored by the center to provide a platform for healthy exchange of views to inform understanding of important public policy issues focused on peace, press, and people.

What’s in the presidential debate?