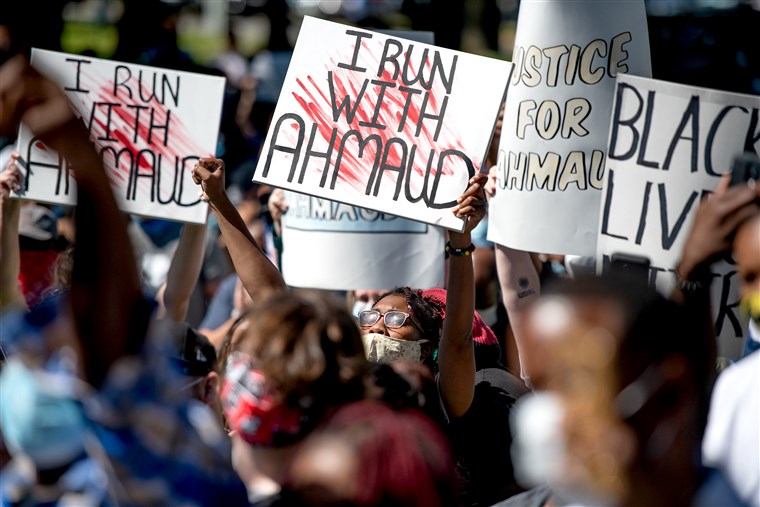 By Christabel Unobe
With the recent murder of Ahmaud Arbery, black families are once more confronted with having a conversation about blackness and decorum within a racially divided nation. When New York’s Mayor DeBlasio, a father of a black son recalled having to discuss appropriate behavior with cops with his son following the Eric Garner’s murder, he drew outrage among Whites as being divisive. But many black families can relate to the all too familiar scenarios of having the dreaded conversation. Alas, we are seeing a resurgence of a dark era in America coming in an election year.
While the Constitution of the United States affords everyone equal status under the Law irrespective of race or creed, in practice however, racist stereotypes and discriminations prevent black people from enjoying equal status. Blackness in the United States just like the Jim Crow era has come to be synonymous with subhuman, inferior, and criminal. Or else, how does one explain why it took 74 days to arrest the perpetrators of the heinous killing of Ahmaud Arbery?

The father, son, and another man – William Rodd- who videoed the killing and allegedly held Ahmaud with his vehicle thereby facilitating his killing. In what justice system is an investigation fair and complete on the account of the perpetrators alone with no corroborating witness(es)? The Ahmaud killing on February 23 went under the radar for 74 days until a journalist prompted by the deceased’s cousin published a news story on April 26: “Two Weapons, a Chase, a Killing and No Charges.” We must ponder, why a private citizen felt it was okay to engage in gun battle with an unarmed man? While Georgia’s law gives a private citizen the authority to arrest a suspect of a felony pending the arrival of the police, video evidence following the killing does not show the deceased as engaging in felonious acts.

Unfortunately, the Ahmaud case is not going to be the last of senseless killings of brown and black people. Whereas the many protests by the #Black Lives Matter movement have enhanced the visibility of these injustices and broadened the conversation, these incidents are happening too frequently. This is 2020 and such barbarism akin to lynching should not be condoned by a modern society especially the United States of America, a beacon of light, justice, and human rights to other countries. Jim Crow was a dark era in America which the country cannot afford to relive. White supremacy groups previously lurking in the shadows have become emboldened and communities of color are increasingly exposed to attacks as recent incidents have shown.

America can no longer ignore the writings on the wall. Civilization is being threatened by groups fearing the ‘other.’ When America preaches human rights in the Middle East, or Africa and condemns the inhumane treatment of minority populations around the world including the Myanmar dehumanizing treatment and ethnic cleansing of its Rohingya population, it must look inwardly. Because, black and brown communities are constantly being threatened. With the recent murder of Eric Garner in the hands of the police to the Pittsburgh massacre among several others, racism is not a thing of the past, it is happening here. Jim Crow is alive and thriving and the structures in place are facilitating dehumanizing treatment of Blacks and other communities of color in the United States. An unarmed black man full of life and dreams was killed, two District Attorneys who came across the file with one recusing himself did not file charges. The matter was left cold until 74 days in a country with a functional justice system. This is the stuff that happens in non-democratic countries. Unless and until justice is served in matters like this with the urgency that they require, the United States may not have the moral high ground to condemn other regimes for absence of rule of law or respect for human rights. You do not go building other people’s houses when yours is in disarray, you fix yours first! Do the needful and restore hope in the justice system. #I Stand with Maud!

Christabel Unobe is a PhD Candidate at the Division of Global Affairs, Rutgers University, and a Research Fellow at the Center for the Study of Emergent Threats in the 21st Century (Et21). Her research interests are broadly around the areas of human rights and mass atrocities, forced displacement, religion, gender, and transitional justice.

What’s the Price of Peace?