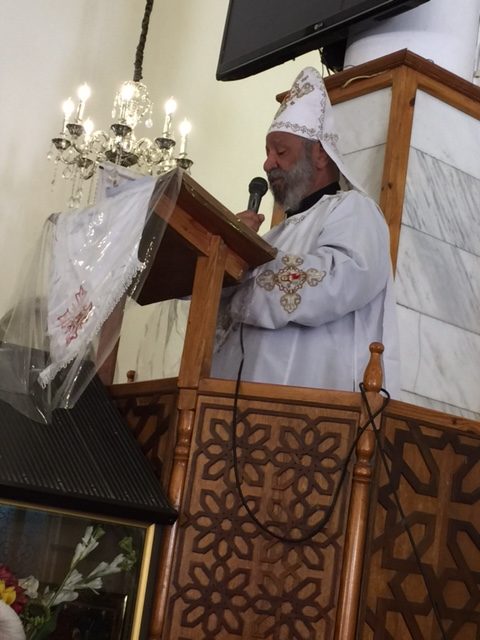 To a great degree, most of the conflicts in Asia, Africa, the Middle East, and elsewhere for much of the 20th century were usually linked to ethnic, political, or ideological rivalries over land, power, and influence.

But, the recent rise of Muslim-Christian tension in the Arab world especially in Egypt suggests these conflicts are now associated rightly or wrongly with the religious affiliation of their participants. Consequently, the world witnesses bouts of horror and senseless loss of lives and destruction of property in these societies that previously lived peaceably with each other. Egypt and other countries in the region may be current “hot spots” of Muslim-Christian conflict in the world, but surprisingly neighboring Sudan can best be described as a country that prides in Muslim-Christian relations with exemplary interfaith engagement.

At a regular Sunday church service, Reverend Dr. Filotheos Farag, the priest in charge of El Shahidein Coptic Church, Khartoum, Sudan told his congregation that Sudan was a peaceful country because Christians and Muslims understand that this is a crucial moment to advance ecumenism. After all, said the clergyman, “Christianity teaches community, humanity, and sympathy for others regardless of gender, race, or creed”.

Rev. Dr. Farag, also an international ambassador of peace and teacher of Sudanese studies spoke of the special relationship between Muslims and Christians and highlighted efforts currently underway to advance interfaith understanding and cooperation between members of the two communities.

Contrary to widely held views, Sudan’s 10 million Christians share similar neighborhoods and do business together including the civil service where gender segregation common in predominantly Muslim societies are nonexistent.

To illustrate the affinity between Christians and Muslims, Prof. Farag narrated a story of how both faiths participate jointly in funerals and wedding ceremonies.

He described how a Muslim neighbor of a Christian bride had to tear down what is locally called nefag (a door that demarcates neighbors) for the singular purpose of welcoming visitors that overflowed from his neighbor’s wedding ceremony. Such is the sacrifice Sudanese people make to forge good relationship with fellow citizens who belong to different faiths, the clergyman noted.

Above all, President Omar Bashir, a Muslim, is said to be a regular participant to the Church’s activities including wedding events and feast of Passover.

At the end of the service, as witnessed by CMPImedia correspondent, some members of the congregation gathered in the office of the priest to share coffee and bread that reminiscence the last Supper of Jesus Christ.

While coffee is served, prominent members of the church including business leaders, technocrats, and international civil servants engaged in spirited dialogue on challenges facing Sudan as a nation.

Many of them notably Victor Butros, a 75year-old Shipping magnate regretted the effects of economic sanctions imposed on their country by the United States. Although Muslims and Christians enjoy good relationships in the business sector, their bottom-line is undermined by the sanctions regime, Butros noted.

As commendable as the Muslim –Christian relations in the country, Ms. Mellam Mcram, a clerical officer at the airport objected to what she considered a disproportionate treatment of Christians by the US in the issuance of nonimmigrant visas. Mcram, whose daughter lives in Florida, believed that US gives more visas to Muslims in Sudan than Christians. While the veracity of her claim cannot be substantiated, it is possible that her failed attempts to get visa may have prompted the suggestion of partiality.

The gathering acknowledged the infiltration of money into religious practices saying that it was unacceptable for some religious leaders that corrode the minds of adherents. One such preaching called “mufty” in local parlance argues “you can eat your wife if you’re hungry”. No reasonable religion should encourage carnivorous behavior.

Understanding the contemporary Muslim-Christian relations in Sudan, as well as current political realities such as the dismantling of the old political order for a more inclusive society, the East African country remains a beacon of hope and rectitude for the entire region where violent extremists – Al Shabab, Boko Haram, and others hold sway.