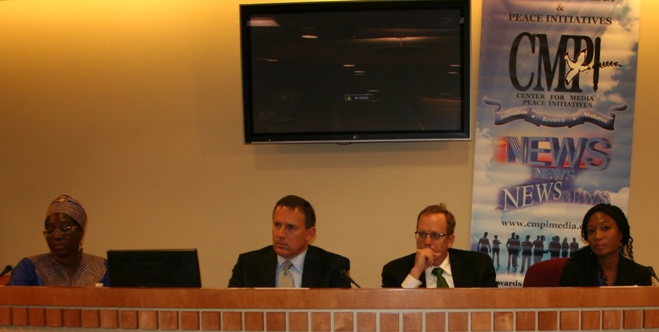 By Francisco Bozzano-Barnes
After a lively conference, we completed an intense and dense wrap up session. The central concerns of this conference were corruption, transparency, accountability, policy integration, infrastructure development, renewable and non-renewable energy systems and types, rural energy, participation of national contractors in megaprojects, public/private cooperation, local imperatives, media and democratic governance, income disparities, financing, Broad Band Internet, education and training, public participation, women and energy, the role of the African diaspora and peace and conflict resolution; to mention a few.
During the wrap up, corruption was denounced as a handicap. Strong measures, media attention, social mobilization and zero tolerance were very much in the minds of those present. As said at the meeting, we wanted to seal the bottom of the barrel before we fill the barrel.
The role of the diaspora in following and sharing informed opinion with the US public, policy makers and major stakeholders, and more specifically in aiding in the monitoring of the Power for Africa Initiative was considered essential.
A strong concern was voiced about the imposition of foreign models on Africa. The need of consulting local people was emphasized, avoiding plans being drawn here in New York, away from the scene.
Everyone present accepted the request that was accepted by all that the CMPI help coordinate and provide research and coverage on Africa for a Zero Corruption Coalition, wanting to know how much is being spent and on what. This theme will galvanize the cooperation of the participants after this event to gain in effectiveness.
The promotion of the Corporate Social Responsibility Model in Africa was also advocated, tied in with education towards sustainable development.
The participation of youth and the use of social media to increase transparency were recommended.
The conference organizers and participants viewed the participation of women, and their crucial energy contribution in rural Africa in collecting firewood and organic fuels, as weakly addressed during the days discussions.
The call for more media coverage on Africa, commitment to anti corruption policy and a community approach to addressing our concerns was unanimous.
Those present agreed that customary respect for the elders should not be confused with subservience in the African debate, since we need to hear the voices of youth, whose real future is what brings us together and is at stake.