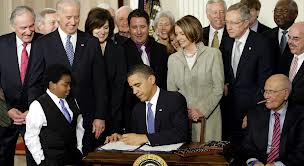 I am exhausted from hearing how the ACA has failed. It hasn’t. It hasn’t had the chance to fail or succeed. The opposition to this legal act are viciously relentless. It also saddens me, to hear the criticisms of reporters and the media just because there have been some trouble with the website. The task of coordinating so much information from various products is enormous. I believe ACA will be a welcome change from the ruthless type of for-profit healthcare that we have had previously which raped medicine for greed by the business community and sadly fragmented care to the patients. Older doctors might be resistant to change, but the young doctors will work well under ACA. Medicine for profit has been ruthless and needed to be curbed, for the sake of quality patient care.

ACA is just a week old today. Think of it like a premature baby. Does the program have problems? Do or did the website and registration process have problems? Yes. Are they fixable? Most likely, yes….as evidenced with the surge in recent registration since December 2013. So, how is that a failure? But unlike a team of medical professionals doing what it takes to help the premature baby survive, some of our indefatigable self-serving politicians want to strangle the baby. A question should be what kind of congressmen are these who gloat when an honest effort on the part of government to provide healthcare to millions of uninsured Americans, stumbles coming out of the chute. I cannot make sense of these political shenanigans.

Like it or not, the possibility of repealing ACA “Obamacare” ended when the Supreme Court found it constitutional and the president won re-election.

You’d think after 40 fruitless votes to abort the law, that message might start to sink in. But no, it hasn’t sunk in at all. The opposition has come up with yet another plan to force the president’s hand. It is something they in-felicitously call “website security vote” The ACA is here to stay, folks. History is done and time to move on. It is now a fait accompli.

Read this and weep, here are the facts: Per capita, Americans pay twice as much for health care as citizens in the second most expensive country, Germany. That means, with the exception of Germany, everyone pays less than half of what we pay. There are two broad measures of public health: life expectancy and infant mortality. According to the CIA World Fact Book, the United States ranks in the 40th percentiles in both, that means below average. So how come the rest of the world can figure this out but we can’t? The ACA maybe far from perfect but what has the opposition offered? “To replace Obamacare with a market based alternative”….what the hell does that mean? The ACA IS a market based plan. It relies on private insurers to provide health coverage to the uninsured, it requires people to shop on the private market and it depends entirely on the good faith of insurance to assure that coverage is comprehensive and fair. I could spend hours explaining why that model may be inadequate. BUT really, while market forces are great for determining the cost of certain goods and services, I have never understood how Health Care can be run along “free market” principles. People don’t choose when to get sick or injured and when they do, they should get the treatment they need, not what they think they can afford. If someone wants to speculate on risky orange juice futures in the commodities market, that is one thing. Gambling on whether or not you are going to get sick, which seems to be the essence of “free market”, “for a profit health care model” is a bad deal for everyone.

Again, to call it “a redistribution of money from the healthy and young to the sicker, poor and older” as if that isn’t what insurance always has been….is disingenuous at best. Everyone gets sick, everyone dies. Many people have terrible health issues that need intervention and that costs money. Over time it has gone from expensive to unaffordable for catastrophic injury and cancer treatments. The point of health insurance is to produce a central fund to make affordable what is otherwise not affordable.

What most people do not realize and which should be strongly emphasized, is that all of us are already paying a “mandate” so that the people who object to mandates can avoid them. Someone who does not have insurance can show up at the emergency room and get at a minimum treatment to stabilize his condition. The hospitals bill these costs into the fee structure that insurers and the self insured must pay. Is it fair for responsible individuals who pay for insurance to support freeloaders with these hidden surcharges on their insurance premiums? How the opposition can’t see the flaw in their argument is astounding. Apparently, spending a fortune on emergency rooms doesn’t fade them, but they have apoplexy over the idea that “those people” might actually get health care.

One logical solution to health care is to decide that it is a right; paid for by some sort of taxes and there whenever and wherever it is needed. It has the potential of being the cheapest. Another logical solution is to decide that it is not a right and that those who have not paid for it might not be able to get it, since they would have to get to where some charitable institution was supplying it. Our present solution is illogical. People who cannot pay can get ER care but not preventive or restorative therapy. The result is that since our health systems are built on a search for the middle ground, they do not and cannot make sense either morally or in terms of economics. Instead we have not one but many kafkaesque bureaucracies within and between which we willingly or unwillingly wonder.