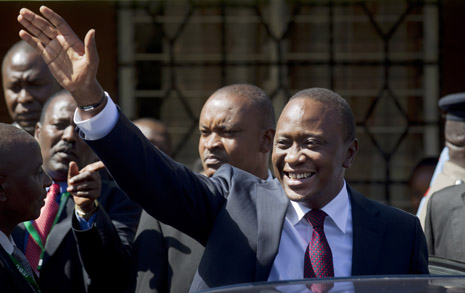 By Uchenna Ekwo
History has a way of repeating itself. Uhuru Kenyatta’s triumph in last week’s presidential election in Kenya has far reaching implications for Kenya, Africa, and the world.

Uhuru, a scion of the founding president of Kenya, Jomo Kenyatta is facing similar political circumstances faced by his father. Prior to independence in 1963, the then charismatic Jomo Kenyatta along with his counterparts in other countries of Africa fought for the liberation of Kenya from British colonial bondage. Today, history seems to have run full cycle as Uhuru’s presidential victory in the face of modern imperialism epitomized in the conduct of International Criminal Court (ICC). With this victory, Uhuru is set to become the new symbol of decolonization of the continent.

The idea of the International Criminal Court is good but to have focused only on Africa since its inception in 1998 does not only make a mockery of its international outlook but also creates a perception of modern colonialism through international jurisprudence. Although investigations are being conducted elsewhere, but to date, the only suspects indicted by the court are Africans. Some countries notably the United States have ignored the validity of the court and yet Africans are continuously harassed and intimidated by the court.

Admittedly, the specter of the International Criminal Court may have played significant roles in the outcome of 2013 Kenyan election. On one hand, the fear of the court may have ensured the absence of violence in this year’s presidential election like the post election violence that occurred in 2007. On the other hand, the forces of nationalism, patriotism, and irredentism among Kenyans may have also been responsible for the election outcome – surely an unintended consequence of prosecuting a nationalist of Kenyatta’s stature. The electorate may have cast their votes for Kenyatta in protest to the indictment of the International Criminal Court and other western collaborators.

Initially many commentators predicted that the charges would hinder Mr Kenyatta’s presidential ambitions. Even his rival, former Prime Minister Raila Odinga, questioned the ability of his rival to run Kenya “via Skype from The Hague”.

But anecdotal evidence suggests Mr Kenyatta re-branded the indictment in such a supremely intuitive way that the ICC label actually worked in his favor. Consequently, the Kenyan elections became a referendum on the ICC and foreign interference in Kenyan affairs.
The latest decision of International Criminal Court to withdraw charges against Francis Muthaura, a co-accused of Kenya’s president-elect Uhuru Kenyatta raises the prospect of eventual acquittal of Kenyatta. It is the right thing to do. Imagine conducting a trial of a country’s president via Skype? Would you do that to a sitting or even past president of the United States or British Prime Minister? ICC risks irrelevance if its targets are just African countries out of 120 other states that signed on to the Rome Statute that established the court.

As salutary and exemplary as Kenyans revolt against imperialism may appear, it is important to remind Africans and the leaders in the continent, that the continent’s destiny is in their hands. Hardly any African will welcome foreign interference in the continent’s internal affairs, but the actions of a few elite sometimes justify external arbiters or interlocutors.

For example, the action of Kenyatta’s main rival Raila Odinga in the days and months ahead will determine the future democratic experiment underway in Kenya, the hub of East African economy still recovering from fratricidal violence that erupted in 2007 presidential election.
Although Odinga, himself the son of Oginga Odinga, a fellow nationalist like Uhuru’s father has alleged massive vote-rigging saying he would challenge the results in the Supreme Court, it is heartwarming to learn that Mr Odinga has appealed for calm, warning that any violence “could destroy this nation forever”. This is what is expected from a statesman.

No doubt, the post-election politics in Kenya is of interest to the international community for a number of reasons. It will determine the country’s relationship with the United States where Barack Obama, a Kenyan-American is the president. There is a brighter prospect of Obama visiting his father’s homeland during the course of his presidency and tout the gains of democracy in Africa. United Nations has one of its headquarters in Nairobi, capital of Kenya and therefore will have a stake in the future stability of the East African country. The globalization of labor and capital will benefit stable democracies and it will be remarkable if Kenya joined the league of stable democracies in the world.

It is clear that elections, corruption, transparency, and political participation are perennial challenges to Africa’s democratic governance. The continent is in dire need of good governance to address a myriad of socioeconomic challenges facing nearly one billion African citizens. In the meantime, this is Kenya’s moment to join the movement for Africa’s renaissance.

Dr. Uchenna Ekwo is the President at the Center for Media & Peace Initiatives, New York. You can follow him on Twitter: @cmpimedia or email: uchenna@167.99.239.142

It is true we need good governance but as you put it, Uhuru and his father, the founding president of Kenya, still i presume have another similarity, they have a group of people who have no interest in the well being of the nation but out to advance their own selfish interests. If this be true, then governance and ethnicity in a modern state would mean in my view, no development since only a few personalities benefit.

I salute you DR for raising such an issue, and as a proud Kenyan, who faithfully my electoral rights, look forward for change. I look forward to the same elect government through the electoral body taking the blame on all flaws in the process as rigging for until then can we sustainably move forward.

For now, it’s the Supreme Court on the limelight. We are all patient and get this landmark ruling.

Dear Sir,
Thank you for taking time to write because it means you also took time to read, and after re-reading your piece, I have a few grey areas I would like you to help me understand better: first, you argue, intellectually, I suppose, that Uhuru’s father, Kenyatta, was a nationalist, and so was Raila’s father, Odinga. You may want to define your appreciation of a ‘nationalist’ because if I remember well, and i do, it was Kenyatta who never appreciated freedom fighters like ojijo oteko, mau mau warriors, including gen. china and field Marshall Kimathi, or Kinjeketille mwenda and laibon. Further, it was Kenyatta who went around and asked his fellow cell mate, bildad kaggia, “we were with you at kapenguria, what have you got for yourself”, which led to kaggia leaving the then thieving government, as did Oginga. Indeed, it was Kenyatta who put his fellow tribesmen in rift valley, while “buying off” the land and owning it in central province, coast, and other parts of Kenya. Of course, only ignorant citizens would believe his salary as president would have bought all that land his family now owns. Some nationalist!
Secondly, you argue that uhuru, the president elect, is leading African renaissance by winning an election while under indictment. Is this what it means to lead a renaissance of Africa? Further, does one become an African champion when they stand against the west? Does this mean that the west is bad, and local is supreme? And even if this were the case, is not uhuru connected with mungiki at The Hague (and eh says nothing of this murderous gang? and he is connected with mungiki in the last threat to chief justice, and he says nothing for this gang’s actions? (Indeed, I have written a book, on the bookshops, “The Mungiki: Oppressors, Oppressed, Saints-Three sides of the same coin”. Does one become an afrikan hero by not answering to his accusers?
Third, you argue that, “Mr Kenyatta re-branded the indictment in such a supremely intuitive way that the ICC label actually worked in his favor” Is this a celebration of African nationalism, rule of law and republicanism, or chest thumping at having enough voting blocs (kikuyu and kalenjin), to win an election? Indeed, I now see the essence of the statement by Raila some years back that, “people get the leaders they deserve.” And not that I support Raila, indeed, in my other book, “Politics of Poverty, Odinga Curse to the Luos”, I make it very clear that the Luos are poor, sick and ignorant because of one man, Raila; and maybe in his fall, we will rise.
Finally, as a doctor, who shapes opinion, you may want to re-think the true meaning of African renaissance, and appreciate that uhuru did not win a victory in the face of modern imperialism. The mungiki were housed at state house, and they caused massacre, and uhuru was implicated. we do not throw away bath water with the baby…we must be courageous to face our secrets, head on…he may win the petition, and become president, but who is more imperialistic than those whose money cannot be accounted for at their source? Indeed, if I may ask, how did Ruto become so rich? Sorry, how rich is he again?
Some Renaissance!
*Ojijo (A Bunch of Solutions)*
Lawyer, Guest lecturer, Poet, volunteer, financial literacy and personal branding public speaker, Investments clubs coach. Public speaking coach, Author (25 books).
Mobile: (256) 776 1000 59. Skype: ojijo.pascal