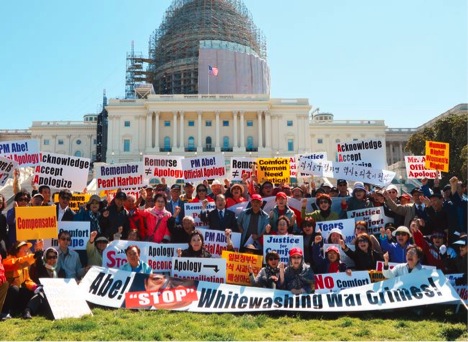 Japan Prime Minister Shinzo Abe started a weeklong visit to the US from last Sunday. This visit’s highlight was the negotiation on Trans-Pacific Partnership trade pact, which Abe and Obama supports to boost exports, and the revision of the US-Japan Guidelines for Defense Cooperation, which allows loosening the restriction of the Japanese military. This agreement became imperative because of China’s increasing military spending and capabilities. Mr. Abe was highly welcomed at a White House banquet on Wednesday and he was the first Japanese leader to speak before a joint session of Congress since the end of WW II.

That milestone notwithstanding, one sticking point that with potential to eclipse the historical visit was the historical injustice and war crimes committed by Japanese soldiers against the Korean people during the second world war. To date Korean people have demanded apology from Japan and subsequent Japanese government refused to utter the simple words: we are sorry”.

Consequently, the agitation for apology over Japanese military’s violence during the wartime, especially about the “comfort women” continues.

From the moment he took the office, his views on WW II remain controversial. He kept an ambivalent attitude toward the violence of Japanese military and didn’t express the actual apology to the victims of the comfort women, the sex slaves during the wartime.

This historical past was the reason that has frosted the relationship between Japan and other Asian countries over the decades. And in this Mr. Abe’s visit, some Korean-Americans are protesting the Japanese government refusal to offer a ‘true apology’.

What does ‘true apology’ mean to the Asian people? Why do Koreans so eagerly demand the apology from Japan, even if it is not a matter of their generation?

Here is the short history of the relationship between Korea and Japan from WW II. From 1910, Japan started the colonial rule of Korean peninsula and mobilized many Koreans for the Pacific War. Young Korean men had to be confiscated for Japanese and some were forced to do the work at the development area without any stipend. Most of them died because of the painful labor and starvation. The stipend and the compensation were estimated 2.1 billion dollars. But after the independence of Korea, Korean government could get only 600 million dollars from Japan and that money was given as ‘the independence congratulatory money’, not as the compensation. Some Asian people had to be imprisoned because they insisted the independence and got harsh torture. They even got killed because of the biological experiment conducted by Japanese 731 troop.

Among many Japanese aggressions during wartime, the most controversial one is “the comfort women” – the sex slaves who were kidnapped and forced to work at Japanese military brothels during the war, most of which were Korean, Chinese teenage girls. The girls were mobilized by the trafficking, fraud, or even kidnapping and they did not know that they would be raped. Even after the Japan’s defeat, most of the victims could not go back to their hometown or get married because their virginity and fertility was ruined. The survivors of the sexual slavery –which is now around late 80’s and 90’s- are protesting in front of the Japanese embassy in Korea every Wednesday from 1992, requiring true apology and compensation.

Since Shinzo Abe took his office, his historical point of view often made headlines. In 2013, Mr. Abe attended to the ceremony of Yasukuni shrine, bowing for the war criminals. This evoked huge criticism from near Asian countries like South Korea, China, and Taiwan. After that, his aides are still attending to the Yasukuni Shrine and supporting it financially.

Mr. Abe also wanted to let Japanese history textbooks describe the violent of Japanese military during WW II much more generous and soften the description of the wartime aggression. He has frequently complained about Japan’s “self-torturing” textbooks. He insisted this self-torturing education let Japanese people lose their confidence and pride.

These Mr. Abe’s behaviors made Asians raged. Especially Korean and Chinese people didn’t hear any apology about the comfort women and couldn’t get the compensation. Japan had founded ‘the foundation for women’ and tried to offer the money to the comfort women survivors, but the survivors denied the offer because it was just the money from private organization, not from the Japanese government as the compensation.

It is the same thing with a crime such as murder. If someone’s grandparents were raped, injured, or even got killed without any later compensation, it would be normal for the victim to require and want to hear the sincere apology from the criminal. But what if that criminal just says ‘It was the painful past’, ‘I feel deep sorrow’ without saying the clear apology? Without saying that who made the past painful? What if the criminal keeps this ambivalent attitude and justification?

It is the same thing that is happening between Korea and Japan. Koreans has required the true apology about the comfort women from Japan, but could not hear it even their grandparents were raped or killed by their ancestors. The survivors are suffering by the painful memories of Japan even till this day. That’s why Korean and many Asian people are eager to hear the true apology.

This is not the only matter of Far East Asia. An organization of American World War II POWs urged Congress not to invite Abe without his acknowledging of Japanese wrongdoing. A group of American veterans said that the April 29 address falls on wartime leader Emperor Hirohito’s birthday, a national holiday in Japan and the day “American POWs were forced to bow the lowest in Imperial Japan’s prison camps.”

Many Asians expected him to apologize in this visit because it would be his first time to speak before a joint session of Congress.

On April 27, Mr. Abe gave a lecture in Harvard University and he said the comfort women were the victim of “human trafficking” and expressed sorrow, without mentioning “by whom and why it was conducted”, without clear apology. At a speech in Indonesia, last Wednesday, he said “deep remorse” for the war but didn’t say any apology.

On April 29’s press conference at Washington, when a journalist asked him a question about the apology over the comport women, he repeated the same superficial answer as he did two days ago. He admitted that Japan’s actions brought suffering to the peoples in Asian countries, but Abe did not offer an apology which South Korea and a number of U.S. lawmakers have sought.

On the other hand, in his address, he expressed the condolences toward U.S. soldiers which died during the wartime. “On behalf of Japan and the Japanese people, I offer with profound respect my eternal condolences to the souls of all American people that were lost during World War II”, “the Asian alliances will enhance the peace and security of the Asia-Pacific region.“ He said. He also mentioned his visiting the World War II memorial on the National Mall, and said he felt deep repentance in his heart, without saying a word about Asian comfort women.

It is the same thing that is happening between Armenia and Turkey. Ottoman Empire, which was the former country of Turkey, killed a million Armenians in early 20th century. Armenians are still requiring the apology from Turkish government, but they are denying the truth insisting that that was the unavoidable sacrifices during the en-masse migration, not the genocide. And there are still deep hatred between the two nations.

In case of Germany, things are exactly different. Germans were taught what happened during the war and the war criminals and those who were involved in Nazi’s are still being prosecuted, when Mr. Abe was bowing to war criminals at Yasukuni shrine. People can be sued if they wave or use Nazi flag in Germany. But Japanese people are using the flag of Japanese military during WW II freely without knowing its meaning –exactly the same meaning with Nazi flag to the Far East Asian people. There are also some movements to make the history textbook much moderate. Is it really ‘deep remorse’ that Abe said? Where is the effort not to do the same mistake?

How can Japan be free from this endless criticism? How can Japan be truly trusted and get along with its neighbor countries without mentioning this torturing history of each other? Even though Japan is one of the strong countries in Asia, there was always deep distrust by the other Asian countries. Japan signed to the revised military guidelines and new financial treaty (TPP) with US, mainly because of the expending power of China. It seems they can deal with this threat of China for a while. But how can they survive in the future global age, without the cooperation with China and other Asian countries? How can that cooperation be truly made? The solution of all those questions can be made by the clever choice of Japan. The choice is theirs.

“We studied with lanterns, candles, or even firewood”