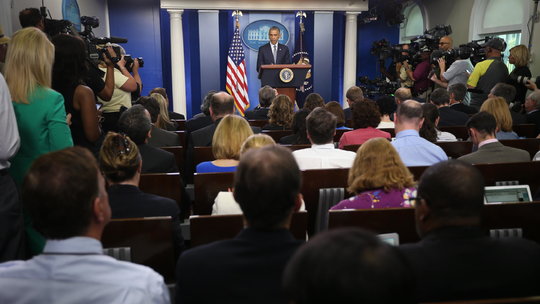 President Obama at the White House briefing room with reporters

Again, Malaysia suffers another air disaster in four months. The country is yet to recover from the disappearance of MH370 in March which had nearly 300 passengers on board almost the same number of passengers with Malaysia Flight 17 that crashed in Eastern Ukraine.

While the March incident could be considered an accident, the latest tragedy to befall a nation is believed to have been executed by Russian separatists in eastern Ukraine.

President Obama said Friday that the United States believed the Malaysia Airlines jetliner felled over eastern Ukraine was shot down by a surface-to-air missile from an area inside Ukraine controlled by Russian-backed separatists.

Mr. Obama’s remarks at the White House were the strongest public suggestions yet from the United States over who was responsible for the downing of the jetliner, which exploded, crashed and burned on Thursday on farmland in eastern Ukraine, killing all 298 people aboard.

Mr. Obama said the loss of life was an “outrage of unspeakable proportions” and a “global tragedy.” He vowed to investigate exactly what happened to end the lives of “men, women, children, infants who had nothing to do with the crisis” in that region. He also said that at least one American was among the dead.

“We are going to make sure the truth is out,” Mr. Obama said, referring to what he described as a trove of misinformation that has already

The president said the violence in the region must not impede an independent investigation of the plane’s destruction and he called on Russia, Ukraine and the Russian-backed separatists to agree to an immediate cease-fire. “Evidence must not be tampered with,” Mr. Obama said. “Investigators need to access the crash site. And the solemn task of returning those who were lost onboard the plane to their loved ones needs to go forward immediately.”

The president spoke after Samantha Power, the American ambassador to the United Nations, told an emergency Security Council meeting on the Ukraine conflict that there was “credible evidence” that pro-Russia separatists and their Russian associates in eastern Ukraine were responsible for the crash.

The Malaysia Airlines Boeing 777-200, Flight 17 from Amsterdam to Kuala Lumpur, was at a cruising altitude of 33,000 feet in a commonly used air route over eastern Ukraine when it was struck on Thursday.

Both Russia and the separatist groups have denied any responsibility, and some rebel leaders have suggested that Ukraine’s armed forces may have shot down the plane. President Vladimir V. Putin of Russia has implicitly blamed Ukraine’s government, saying it created the conditions for the separatist uprising that has escalated into a major crisis. But Mr. Putin has not denied that a Russian-made weapon may have destroyed the aircraft.

Mr. Obama resisted blaming Mr. Putin personally, saying that the government does not know exactly who fired the missile. But he made clear that he holds the Russians responsible for failing to stop the violence that made the downing possible.

“We know that they are heavily armed and they are trained,” Mr. Obama said. “That is not an accident. That is happening because of Russian support.” He said it is “not possible for these separatists to be functioning the way they are” without Russian support.

The president said the loss of the plane was a direct result of the fighting in the region and that the violence had been “facilitated in large part because of Russian support.”

Mr. Obama said Mr. Putin could make a decision not to allow heavy armaments or troops to flow across the border from Russia into Ukraine. If Mr. Putin does that, he said, “then it will stop.”

In her remarks at the United Nations, Ms. Power said, “We assess Malaysia Airlines Flight 17 carrying these 298 people from Amsterdam to Kuala Lumpur was likely downed by a surface-to-air missile, an SA-11, operated from a separatist-held location in eastern Ukraine.” She also said the United States could not “rule out technical assistance by Russian personnel” in operating the system.

The 15-member Security Council unanimously called for a “full, thorough and independent international investigation” into the cause of the crash. Jeffrey D. Feltman, the United Nations undersecretary general for political affairs, told the council that 80 children were among the dead.

Ms. Power’s assertions were substantiated by two senior Defense Department officials, who said Pentagon and American intelligence agencies had concluded that an SA-11 missile, fired from an area near the Russia border, had downed the plane.

That conclusion is based on an analysis of the launch plume and trajectory of the missile, as detected by an American military spy satellite. The American analysis did not pinpoint the precise origin of the missile launch or who actually launched the missile. But a senior Defense Department official said the Americans believed the missile had been launched “from several kilometers inside the Ukrainian border.”

Ukrainian officials, who have called the downing a terrorist attack carried out by the separatists, have referred to a different name for the missile, the Buk M1, which the Ukrainian armed forces possess and which may have been purloined by separatist fighters, was possibly responsible.

“The analysts are still trying to get detailed granularity on that,” said one senior Pentagon official. “Those are the million-dollar questions.”

There was also still no indication of motive, though most American analysts have concluded that the missile operators believed they were firing at a Ukrainian military plane, not a civilian jetliner.

At the crash site near the mining town of Grabovo, in rebel-held territory near the Russia border, a dispute was emerging over who seized the plane’s flight recorders, which could shed light on the last moments.

The voice and data-recording devices that had been aboard the Malaysia Airlines plane were said to be missing from the crash site.

Kostyantyn  Batozsky, adviser to the Donetsk regional governor, said in a telephone news conference that the aircraft voice and data recording devices had been recovered by workers from the Ukrainian Emergency Services Ministry who had been granted access to the crash site by rebels who control the region surrounding it. But he said he did not know the current location of the devices or who had possession of them.

Trump and end of racism?