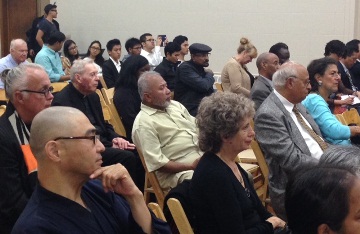 No doubt, we live in a world of extremism. From Washington to Mecca: from North Korea to Iran: from Egypt to Zimbabwe, there are forms of extremism either political or religious. For example, the current partisan gridlock in Washington and other capitals are forms of political extremism while the current crisis of ISIS (Islamic State of Iraq and Syria) and those of other fundamentalists are extremism of religious flavor.

But how can the world overcome extremism especially those of religious flavor? Is it ever possible? In order to provide answers to these and other questions, society must understand why extremism exists and persists for so long.

In a row, I was a guest to two forums that focused on religious intolerance and the quest for global peace. At both forums in New York and Seoul, South Korea, many speakers singled out the media as the deus ex machina in the battle against religious extremism.

During a panel discussion convened by New York-based Nusantara Foundation, the Rev. Dr. Katharine Henderson, president of Auburn Theological Seminary put the media on the spot. The clergy attributed the proliferation of extremism to messages dished by the media to the public. In her view, religious extremism persists because of messages that glorify violence in the media and the inability of messengers of peace to talk loudly in the media. For example, Muslim leaders who preach peace and tolerance such as Imam Shamsi Ali of Nusantara Foundation are drowned in the cacophony of voices in the media. Voices of peace need to raise their voices and calibrate their messages more pointedly.

Most importantly, millenials who are Internet savvy must join in the campaign for peace around the world. Reverend Henderson tasked the younger generation to help get out the messages of peace in the Internet while Reverend Paul Raushenbush, Religious commentator and editor at Huffington Post noted that the most effective way to challenge modern day terrorists was to take the fight to the online platform which they seem to dominate at the moment. “Pluralistic religious groups and leaders have failed on the use of the Internet which is the dominant medium exploited by terrorists”, Reverend Raushenbush stated.

Obviously, ISIS does not make use of the mainstream media to convey their messages throughout the world. The recent beheading of journalists and other Westerners were show cased on the Internet. Besides, all propaganda materials of terrorists including ISIS and al Qaeda are often published online and that underscores the importance of online communication in the struggle for the hearts and minds of all those who care for peace or war in the world.

Above all, the younger generation adept with digital culture has a greater stake to the future of the world where peace prevails and devoid of political and religious extremism. Should the younger generation commit to peace with the same zest of the terrorist, the world would certainly be a better place. A recent visit to Seoul, South Korea for a global peace summit convinced me that the youth can make a difference. I have never seen such an army of young people who volunteered for the cause of peace like I witnessed in Seoul last week.  You might have the impression that all university students in the country came all out to walk for peace as the Seoul Olympic Stadium was filled to capacity and so was the Convention center that featured speeches from world leaders and religious leaders.

Why does the world have extremists? Rabbi Bob Kaplan, the founding Director of the New York Center for Community and Coalition Building, a division of the Jewish Community Relations Council of New York (JCRC), who spoke at the panel discussion in New York on “Challenging Extremism: A Religious Perspective” took his audience to task and sought to know who’s an extremist in the room.

Of the nearly 100 participants in the room, only two raised their hands admitting they were extremists. The Rabbi also acknowledged he was an extremist. As Jewish practitioner, he said: “my faith prohibits me from touching the cell phone, Internet, and other devices at certain times and also prevents me from eating certain types of food”. “To that extent, someone may view me as an extremist”. According to the Rabbi Kaplan, there is nothing wrong in being an extremist but practitioners of different faiths must answer the following questions in order not to cross the line: when do I approach being hateful? What touches my button of fear and anxiety? How do I become an authentic voice for my spiritual path?

A rather interesting perspective of looking at global violence is also to view it with a gender lens.  Dr.Serene Jones, President, Union Theological College who also spoke at the Nusantara Foundation forum in New York noted that 75% of those who claim to be religious practitioners in the world are women and yet women are not involved in religious violence. Therefore, it is possible to explain that the growing extremism in the world is also a form of macho expression; a display of masculinity and not necessarily a show piety.

Ambassador Dr. Muhamed Sacirbey, former UN representative of Bosnia and Herzegovina spoke of the need to use social media by moderate voices to drown extreme voices in the Internet. In what he phrased as “digital diplomats”, society can develop digital natives to counter the activities of religious extremists. He drew a parallel with the struggle of homosexuals saying that in the past, their voices were not as powerful as it has become today. Similarly, moderates in different faiths could through consistent messaging create a positive impact that will force society to listen to them instead of terrorists.

But testing the right message in the media poses a challenge. For example, what is it that people still don’t understand about Islam? I must confess that there are things I don’t understand about Islam and what seem to be some fascination for violence among few of its practitioners. I am among the 55% of Americans who say they do not know very much or know nothing at all about Islam, according to a 2010 Pew Research Religion and Public Life Project.

This is the challenge of all religious leaders who often blame the media for intolerant behavior of their flock. There is nothing like a monolithic media; neither is the media as powerful or influential as people suggest in changing attitudes. The perception that the media can magically change behavior has been debunked by many studies. The era of stimulus-response or hypodermic needle theories of the media (also known as the hypodermic-syringe model, transmission-belt model, or magic bullet theory) that suggests that an intended message is directly received and wholly accepted by the receiver is gone. The flow of communication is no longer vertical but horizontal.

Therefore, instead of blaming the media or expecting the media to perform some kind of magic, Marshal McLuhan’s “the medium is the message” mantra is instructive. What is needed is a clear message of peace and tolerance by credible messengers and propelled by millenials in the most active medium which is the Internet often a source of content for the mainstream media.  The media, message, messenger, and millenials can make a difference.