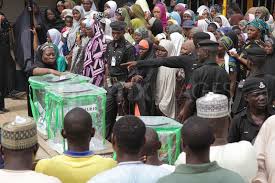 With the Nigerian Presidential election on March 28 now less than 24 hours away, the tension and anxiety of the country is palpable. This will be the fifth election since 1999, when military rule was ended in Nigeria. However, this is the first time that the ruling People’s  Democratic Party (PDP), which has won the previous four  Presidential elections, and their candidate, incumbent President  Goodluck Jonathan, are seriously being challenged by General Muhammadu Buhari from the All Peoples Congress (APC).

In the days before Saturday’s election the following has occurred:

* On Wednesday the Supreme Court rejected a last-minute legal attempt, initiated by the PDP, to remove Buhari from the ballot, alleging he had not obtained a high school diploma.
* On March 25 the Army Chief of Staff, dressed in military fatigues, announced a directive from President Jonathan that all borders with neighboring countries would be closed to movement by
land and sea from March 26 through the election.
* On March 25 the police announced a directive from President Jonathan that all voters were to return home after voting, and not remain at the polls. Also, that all movement was to be restricted on Saturday, March 28–a virtual lockdown.
* Beginning on March 24 there was a noticeable increase of military check points, examining vehicles on the road.

* On March 24 former President Obasanjo called on the military to not intervene in the election.
* Beginning on March 26, long lines formed outside ATM bank machines as Nigerians withdrew cash in anticipation of the election and its aftermath. Additionally, the banks announced by text messages to their customers that banks would be closing early on Friday, March 27.

The PDP government has pulled out all the stunts to defeat Buhari in this down-to-the-wire election. The major newspapers and the National Television Authority news program have heavily slanted their coverage in favor of President Jonathan and against Buhari.
Curiously, a story that first appeared in the {Washington Times} on March 19, written by Richard Grenell, is being prominently covered in the Nigerian press. Grenell, a self proclaimed homosexual Republican and same-sex marriage advocate, who was appointed by President George W. Bush as a spokesman for U.S. ambassadors to the UN and worked for the Romney Presidential campaign, has  attempted to link Buhari to Boko Haram and ISIS.
A large reason for the support for Buhari is the result of years of frustration by the Nigerian population, who are looking for change from 16 years of PDP domination. One commentator in Abuja made the following poignant observation:  For a 72-year-old former military leader who ruled the country 30 years ago, to be getting so much support, indicates how bad conditions in Nigeria really are.
The key underlying issue that is gnawing at the Nigerian population is the horrible condition of life for the majority of Nigeria’s 180 million citizens. Economic conditions have not improved, except for a small percentage of the people, while more than 100 million live on $1-2 a day. Electrical power generation
is deplorable — less than 4,000 megawatts is generated by the government with only approximately 2500MW available per day. The economy is left crippled, and Nigerians must power their homes
and businesses with personal generators that provide tens of thousands of additional megawatts of power. Recently cars have had to wait in 1- to 2-km queues for fuel. The Nigerian currency,
the naira, has depreciated from 155 to the dollar last summer to 225 to the dollar today.
There is a prevailing sense of hope among Nigerians that their nation will pass through this election peacefully, although scenarios abound about the potential for chaos, violence, and vote rigging. Regardless of who wins, the next government will be faced with the enormously challenging task of developing Nigeria’s crippled economy

Lawrence Freeman is the Head of Africa Desk, EIR magazine. He is a frequent contributor to CMPImedia

What’s in the presidential debate?