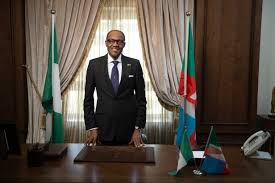 Following the recent successful presidential and parliamentary election in Nigeria, many observers from different countries continue to praise the West African country and warn of challenges ahead of the new administration set to take over on May 29th.

One of the international journalists who were in Nigeria to cover the historic election, Lawrence Freeman, the Head of Africa Desk of US-based Executive Intelligence Review Magazine expressed cautious optimism about Nigeria’s future.

After a 20-minute meeting with the president-elect, Mohammadu Buhari, Mr. Freeman who has reported on Nigeria for over two decades says he came out with the conclusion that Buhari was aware of the enormous security and economic challenges in the country.

Mr. Freeman was speaking in New York when he lead a delegation of EIR Magazine’s editorial team to visit to the corporate headquarters of Center for Media & Peace Initiatives, CMPI.

He noted the passion and commitment of Nigerians to democratic change saying that “I saw young people, women, and the old standing patiently in a queue to cast their votes under nearly 110 degrees temperature”, the EIR editor said.

Without a doubt, points out Mr. Freeman, Nigeria’s March 28 Federal election for President, Senate, and House of Representatives was an historic accomplishment of the Nigerian people, and the single most important political event in Nigeria since it achieved independence from the British Empire in 1960.

According to him, the election will benefit Africa and the world. “This election—free, fair, transparent, and unhampered by ethnic or religious violence—is special for the Nigerian people, who demonstrated they would no longer accept having their leaders imposed on them without their consent and participation”

Mr. Freeman, however, stressed that Nigeria must look for alternative revenue sources rather than the current focus of oil because current projections indicate that the collapse of oil prices would linger in the midst of reduced US importation of oil and diversification of energy sources. Said Freeman:“During my brief meeting with Buhari, I told him that he should not expect help from foreign countries because western countries including the US are not in sound economic state to assist Nigeria anymore”.

He also called on the new administration to invest in agricultural development and singled out development of Lake Chad in the North Eastern region of the country with the potential to improve security, water, and employment situation in the area.

In his remarks while receiving the visiting US journalist, President of CMPI, Nigerian-born Dr. Uchenna Ekwo expressed gratitude to Mr. Freeman for his long-standing interest in Nigeria’s sociopolitical and economic development, saying the sacrifice to cover the election was just another effort by Freeman and his news organization to project Nigeria with the much-needed international lens.

Dr. Ekwo maintained that the outcome of the election in which the incumbent lost to the opposition was historic, pointing out that “although President Jonathan lost the election, his conduct after the election made him the actual winner”.

“Never had a Nigerian civilian leader lost an election and gracefully accept the outcome by calling the winner on the phone to congratulate the president-elect; it is a new dawn; a new culture in a country notorious for post-election irregularities and violence”.

The CMPI president pledged to work together with Mr. Freeman in organizing an international forum to discuss the prospects of Lake Chad development considering the importance in the economic security of Nigeria and other adjoining countries.

Mr. Freeman presented a copy of EIR Special Report entitled “The New Silk Road Becomes The World Land-Bridge” – a publication that documents the pathway to peace in the 21st Century through the reconstruction of the world economy. The cover price is $250.00 and it is available in bookstores and online as well. It is a compulsory reading for anyone concerned about the state of the world economy.