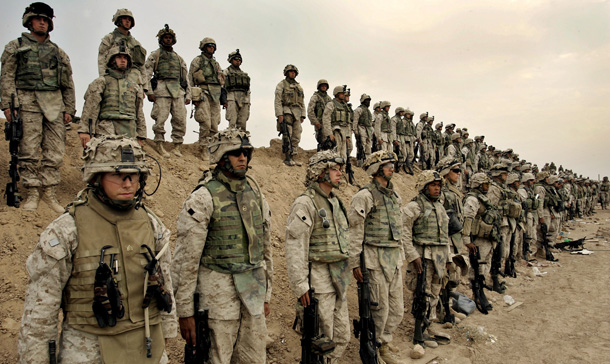 A Mystery Source — Withholding Operation Avarice from the Public

The contents of Iraq’s weapon arsenals remain objects of lethal allure, as a recent leak shows the C.I.A. purchased degraded chemical weapons from a mysterious source.

In 2003, the United States hurdled into a nine-year conflict because of alleged Weapons of Mass Destruction, never uncovered. Meanwhile, the Army kept the extent of Iraq’s chemical weapon troves quiet.

Unanswered questions prevent the public from assessing the full scope and nature of Operation Avarice’s impact. Though little is known about the program, the facts and mysteries remaining reveal a few telling points about the military and intelligence communities of the time, and how they mishandled the chemical threat.

Where was the money going? Did the operation promote overall peacebuilding or feed future conflict?

Operation Avarice’s success can only be measured with an understanding of its costs. There were two sides to this exchange. The military was getting weapons, and it was giving somebody funds. We’re missing a few key details here.

First, it remains unknown how much the government was paying for the rockets. Of the 400 or so rockets acquired, many were degraded, filled with something other than sarin, or empty. How many were still dangerous? What was the value of what the U.S. government secured versus what it gave out?

Second, the Times article stated it was unknown if the source was a smuggler, a former or current Iraqi official, or a front for Iraq’s government, or how much the C.I.A. knew about him in 2005. How diligently did the C.I.A. track where the money was going and undergo risk assessment? Was the U.S. pouring funds into the Iraqi economy — a venture that could increase the vitality of its civilians and stability of the nation — or funding violent action and prolonging the peacebuilding process?

Perhaps the program’s impact helped the greater good on both ends: weapons were removed, and funds stimulated the livelihood of Iraqis. But withholding the details about the operation precludes the public and the media from making a fair analysis of its strengths and drawbacks.

Why not paint the program as an arms reduction success story?

From 2003, the Bush administration had embroiled the United States in a long and unpopular war. The presidential approval ratings dropped from 49 percent in 2005 to 32 percent in 2006, according to a CNN report. The military had found no new Weapons of Mass Destruction in Iraq. At the time of Operation Avarice, the U.S. desperately needed to show Iraq was armed and dangerous. Keeping the source a secret during the operation likely protected the relationship, but why wasn’t the acquisition of 400 Borak warheads revealed post-2006?

The Times identified two public relations reasons and one military explanation for keeping chemical weapons quiet. The weapon arsenal pre-dated 1991 and was not what the U.S. had invaded Iraq to look for. Designs for some of the rockets were American, although Iraq had purchased copies from Spain, Italy and Belgium. Most compellingly, taking precautions to test for chemical contamination in the ongoing war effort could slow demilitarization operations.

Still, revealing the operation’s success could have rebuilt some confidence that the military was fulfilling its mission to bring security to the region, at a time when many Americans were wondering what the Army was doing there. Retired Army Lt. Gen Richard Zahner, the chief American military intelligence officer in Iraq at the time, told the Times Avarice outstripped any other intelligence program for reducing chemical weapons in Iraq after the U.S. invasion. If the program was so successful, why was it kept secret even after the relationship had ended? Avarice’s leak comes three years after U.S. forces withdrew from Iraq and four months after a Times report pointed to general mismanagement of chemical hazards during the invasion. Is this a delayed effort to offset some of the recent criticism with a success story? Why now?

Why was the effort halted instead of renewed?

The source began to get “cocky,” scammed Americans by nonlethal warheads as sarin-filled Borak warheads, and threatened to sell weapons to insurgents, according to veterans interviewed by the Times. Discontinuing the relationship in 2006 seemed reasonable. But why not forge a new relationship and continue taking Borak warheads off the market? Did the CIA really know so little about its source that it could not trace a mother lode of warheads or intercept them elsewhere? One handoff was reportedly as large as 150 warheads; most were destroyed with others sent to the U.S. military base, Camp Slayer, for analysis. A source with that kind of access likely dealt regularly with weapons and had extended contacts in their trade, yet the Times report indicates no other source or continuation of the operation post-2006. Were there any future efforts to purchase chemical weapons? Or why not?

Disarmament efforts such as Operation Avarice should consider economic and social impacts as well as immediate military gains. The public knows too little about this program to judge if the military made a sound calculus of risk or not, but one can hope that future disarmament efforts can both reduce violence by limiting access to hazardous weapons and promote long-term peace by reinvigorating nations and economies marred in warfare.

Check back next week for an analysis of why the military concealed the presence of chemical weapons in Iraq, even from Congress.