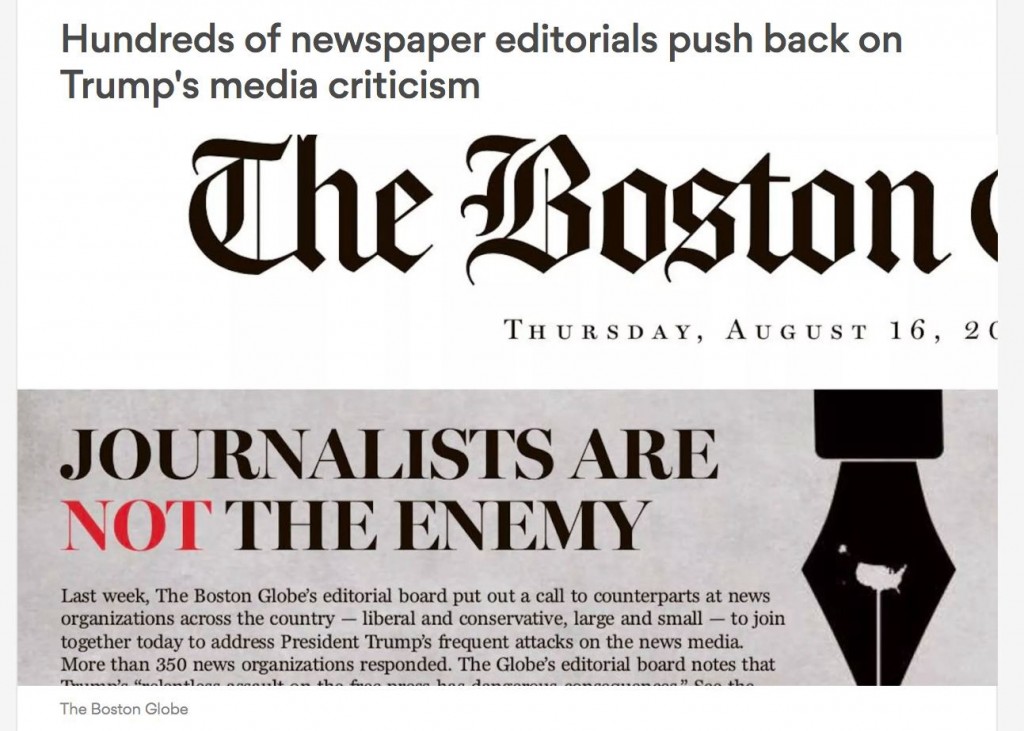 By Uchenna Ekwo
Thursday’s coordinated editorial campaign by over 350 newspapers in the United States that denounced President Donald Trump’s unrelenting attacks on the news media amounts to a formal declaration of war between the two institutions of American democracy: the executive and the fourth estate of the realm. Prior to the unanimous response from a segment of the news media industry, Trump-media impasse seemed to be one sided. He pounced on the media so loudly, so often with little response from journalists.

But, by speaking with one voice, the news media industry seems to have accepted Trump’s bait for a war. The sad thing about the fight is that neither side will win. Instead, the country and potentially the entire world will lose.
The decision by the newspapers to reprimand Trump in coordinated editorials will further arm Trump and his followers who are likely to perceive the media’s step as confirmation of Trump’s unfounded allegation that the media is part of the gang that is determined to delegitimize his presidency.
On the other hand, the newspaper editorials are commendable because the newspapers owe their audience an explanation and response to anti-media rhetoric from Trump administration. If the media kept quiet and fail to fight back, it is possible that the public might accept Trump’s version of what the news media is not. So, it is appropriate for journalists to refresh the minds of readers on the responsibilities of an independent press in a democracy. That it is the solemn duty of the news media to hold leaders accountable to the people; call leaders out when they mislead, distort facts, and engage in propaganda.

While the coordinated condemnation of Trump’s “media as enemy of the people” mantra is an acceptable professional first step, it is unfortunate that the change in the media ecosystem will render the traditional approach very ineffective. During the 2016 election, majority of American News organizations endorsed Hillary Clinton and yet Trump became president. Newspaper editorials no longer have the potency it once had because of the fragmented media landscape. Those who value newspaper editorials are mostly the segment of the population who are not political zealots and who might not even vote on Election Day.

Surely, the newspaper editorials will not influence Trump’s army any bit. If they couldn’t care if Trump shot someone along 5th avenue, how would a newspaper editorial change their opinion of their favorable leader? Think of how many times that Trump was caught making misleading statements and he will deny it and say the media is to blame even when he is on tape or camera. His followers will argue that people should ignore his statements because he never meant them and we should focus on what he does and not what he says. The country is truly in a quagmire: no easy way to handle the Trump challenge.

The popularity of Trump’s social media presence – on twitter with nearly 54 million followers and millions of followers on Facebook has further made media’s war against him more difficult. He recently told his followers that “what they read, or hear, or watch on television is not real” and asked them to disregard them. By implication, the alternative information he spews in social media is the gospel truth from ‘Apostle’ Trump. With the cult following of many, they will accept what he says instead of what the “crooked” news media tells them. To make matters worse, the same news media that is supposed to be at war with Trump will publicize his tweets the moment it is published. In war, information flow is a key resource and if the news media helps Donald Trump to disseminate his information – whether accurate or inaccurate, at the speed of light, his narrative ends up getting the prompt attention of news consumers. After all, attention is the most essential commodity today in information sharing. And sustaining the attention requires brevity and which Trump by default masters so well. The average journalist may fault Trump for his poor vocabulary but that disadvantage becomes a dividend in reaching out to his followers.

After observing Trump’s political trajectory for some time now, he will never change to the norm of a conventional president. Therefore, fighting him in his turf is not a smart strategy. Instead, he will relish it and drag the opponent into a mud, soil the opponent in the process. He has nothing to lose because all those who made him president factored his unorthodox behavior and still sent him to the Oval Office.
However, journalists cannot surrender to allow Trump bully fellow citizens. In addition to the show of solidarity demonstrated by the over 350 newspapers in defense of free press and freedom of expression of citizens, different media houses should do more. For example, media organizations should stop amplifying Trump’s tirades on twitter and other social media except as commercials or advertisements.

Moreover, media houses especially electronic news organizations should boycott his political rallies or blackout his incendiary rhetoric. It is likely to hurt the president because he loves publicity more than anything. Imagine, how he will feel on a day he doesn’t see himself on television. Trump insults New York Times as “failing Times” and yet he calls the newspaper for exclusive interviews; he berates NBC, yet he grants special interviews to the organ. If he really hated these organizations, he would have boycotted them completely.
Hurling insults on people, products, places, and organizations is probably in Trump’s DNA. One of his aides recently described him as an “equal opportunity insulter.” He insults the judiciary, the legislature, the executive branch he heads, intelligence community, and indeed the entire country. “We have been foolish” (referring to the United Sates) he said recently at Helsinki during a press conference with Russian strongman, Vladmir Putin. In reality, Trump is a proven insulter-in-chief.

The sad reality about Trump’s selfish attacks on the media is that it reverberates beyond the shores of the United States. Despots around the world will be emboldened to oppress journalists and undermine freedom of expression. New York Times publisher Arthur Sulzberger was right when he told Trump at a recent meeting that press freedom is one of the greatest exports of American democracy to the world that will be diminished if US could no longer be a role model in journalism practice in the world.
Everything considered, a truce is necessary at this point. Neither Trump nor journalists can win this senseless war. Even any side claims victory, it will only be a pyrrhic victory. Trump should ignore the news media and do the people’s job and the news media should focus on winning the confidence of the people so that in the final analysis the Fourth Estate is seen as Denton Record-Chronicle phrased it “we are not fake news — we are your news.”

Communication Challenges and Political Ideologies in Africa : A Case Study of Ivory Coast