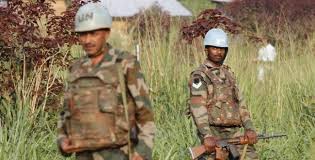 By Yvan Yenda Ilunga
Again, Democratic Republic of Congo (DRC) is the scene of bloody conflict with obvious serious humanitarian consequences. Fighting resumed in the Kivu earlier this year, and relations between the DRC and Rwanda have deteriorated dramatically; armed conflict could break out at any time.
The United Nations (UN) and the Congolese government both accuse Rwanda of backing M23, a rebel movement which originated in a Congolese army mutiny in April 2012. This accusation, and especially the support given it by the United Nations, has fed hostility, and consequently the lack of trust has led to the deterioration of relations between the neighboring countries. The conflict in the DRC is of great concern because it could threaten the security and economic stability of the Great Lakes region, and could even affect Southern Africa. This scenario has drawn member countries of the Southern African Development Community (SADC) and the African Union to work for a lasting solution to the ongoing unrest in the DRC. Some SADC countries, Angola and South Africa in particular, see the restoration of peace in the DRC and the Great Lakes region as crucial to their economic development.
Besides offering many nations in the West and the global South, a means to advance their economic interests, the restoration of peace in the DRC could provide the United Nations with a valuable opportunity for restoring trust in the organization. Despite a UN peacekeeping mission having spent many years in their country, the people of the DRC feel that it has done virtually nothing, and achieved little as a consequence. The UN forces did nothing to prevent M23 from occupying Goma, the provincial capital of the North Kivu province in November 2012; this is but one example of the UN mission’s failure to act. (At that time, the UN forces justified their inaction by claiming that they did not have a mandate to fight M23.) Furthermore, the UN mission in the DRC is the most expensive UN mission to date. The disillusionment of the Congolese has led to incidents where UN vehicles and buildings were vandalized.
The creation of the UN Force Intervention Brigade (UNFIB), in terms of the UN Security Council Resolution 2098, has somewhat restored the Congolese people’s confidence in the UN and the international community, but should UNFIB fail to protect the sovereignty of the DRC and the security of its population, it is likely that the country and the region will endure long years of unrest, the consequences of which are unthinkable.
The recent success of the military operations against M23, which brought the DRC military and UNFIB together, could be seen as a good beginning in rebuilding trust in the UN. However, much more is needed than a military success; peace is not achieved simply by silencing the guns.
Though the international community may agree that restoring peace to the Great Lakes region is essential to rebuilding trust on the UN system; the Congolese people, as well as the citizens of the neighboring countries, want an end to years of war. (More than six million people have been killed, and the devastation has created a humanitarian disaster.) They measure peace by the fact that women no longer live in terror of mass rape, either as a weapon of war, or the product of a dysfunctional society; that parents can send their children to school knowing that their children will not be forced to join militia groups; that people can go back to their communities, villages and towns for gun fire no longer has them running for their lives; and the natural resources are well managed by the Government and bring benefit local communities, etc. This is how the people of the Congo envisage peace, only lasting peace will restore their trust in the UN system.
Yvan is a Social and Economic development strategist and contributor to The CMPI Journal