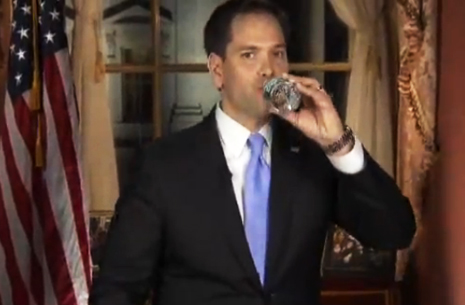 By LIZ SIDOTI
Persistently high unemployment. A sluggish economy. Debt. Deficit. Obesity. Fundamental disputes over guns, immigration and the climate. A to-do list that would exhaust even the most vigorous multi-tasker. A meteor in Russia, even.
Yet what created one of the buzziest brouhahas in America last week? Florida Sen. Marco Rubio’s inopportune sip of water on live TV.
Enormous challenges pack the nation’s plate, but this country just can’t seem to get enough of the small stuff.
It sometimes feels as if the collective obsession with the trivial is drowning out significant moments and overshadowing important debate. What does it say about America when the silly and the serious are considered with equal intensity? How can we keep some perspective? And what are the dangers if we don’t?

It happens everywhere. But in the realm of politics alone, there is plenty of blame to go around for the focus on the frivolous. And there are deeply conflicted feelings among those responsible.
Americans say they crave the authentic, yet also admonish people who deviate from script. Candidates waste no time capitalizing on opponents’ woes – and decry the unfairness of it all if they make bobbles of their own. The media relentlessly covers small moments that ensure viewership, even as its executives fret about the trend toward style over substance.
And in a world that grows more dizzying by the month, the easy and entertaining can be a lot more attractive than the complex and educational.
“We’re seizing on the tiny because our brains can’t really do the work of processing every little piece of information we get. At the same time, the Internet and the explosion of other media are fueling this focus on the small,” says Eric Dezenhall, an image consultant who has worked for years with politicians, Hollywood stars and business moguls.
“This is something that is a combination of what’s hard-wired into the brain … multiplied by a system that we don’t control,” he says.
America has long had its water-cooler moments, the missteps by people in the spotlight that became fodder for late-night TV comics and office workers. But now, society gathers around one huge water cooler for one big instantaneous conversation.
Thus, insignificant blunders are amplified into days-long national debates, creating stereotypes that can be difficult to shake. Just a few from the political world in recent years:
Clint Eastwood’s conversation with an empty chair at the Republican National Convention.
Vice President Joe Biden’s use of the F-word on live TV in a whispered congratulation to President Barack Obama at the signing of his health care bill.
-Rep. Joe Wilson, R-S.C., shouting “You lie!” in 2009 as Obama spoke to a joint session of Congress.
Most people probably don’t remember the substance of any of those events, only the trivial moments.
Even without perceived gaffes, mere sound bites also balloon from the inconsequential into mini-controversies that overshadow more substantive debates.
“You didn’t build that,” for example, was just a snippet of what Obama actually said during the campaign about government’s role in helping entrepreneurs build businesses. His political enemies used it to tag him as anti-business.
And a Mitt Romney aide’s comment about hitting a reset button between the primary and general elections – “It’s almost like an Etch A Sketch. You can kind of shake it up and we start all over again” – was vigorously amplified by Democrats eager to suggest the Republican lacked core beliefs.
The truly trivial can have lasting impact by shaping how the public views the person involved.
Rubio, the Florida Republican with national aspirations, drew criticism from pundits, comics and online critics after he reached off camera for a bottle of water and took a sip during a televised speech rebutting Obama’s State of the Union address. Within minutes, three things happened: Twitter lit up with criticism, Rubio was quickly labeled “not ready for prime time” and the substance of his speech (largely about the middle class) was all but forgotten.
The senator responded by making light of the moment, including in an email hawking Rubio water bottles for $25. “Don’t get angry at the liberals who want to bury what Marco said. Laugh at them,” his political action committee wrote. “Send the liberal detractors a message that not only does Marco Rubio inspire you … He hydrates you too.”
The eruption over Beyonce’s singing, or lack thereof, of the national anthem in real time at last month’s inauguration is only tangentially about politics. Yet it offers some insight into this whole syndrome.
After the flap wouldn’t go away for nearly two weeks, Beyonce confirmed she had sung to a prerecorded track because she didn’t have time to practice. She said that, without the possibility of a proper sound check, “I did not feel comfortable taking a risk.”
Maybe that’s precisely it. As the singer’s comments suggest, one result is that a country built upon bold actions is becoming, in the harsh spotlight of a real-time, hypercritical conversation, more averse to risk and more likely to seek refuge in the packaged and the surer thing.
That leads to more packaging – and, potentially, less transparency – in a society that insists it wants to be open and real. Will people just keep on tuning out a public sphere that they perceive as fake? That’s an outcome that would seem to benefit no one.
So you out there: If you want the country to stop obsessing on the trivial, start with yourself. Before you take to Twitter to smart off about the small stuff in public life, stop and ponder for a moment. Like no other generation, suddenly you have a global megaphone. Ask yourself: Is this really, truly something worth shouting about?
And if not, consider making a choice that so many have such a difficult time with these days. Instead of a fleeting moment of snark on a minor matter, maybe, this once, maybe just shut up already.
You might be making a tiny investment in our future.
EDITOR’S NOTE – Liz Sidoti is the national politics editor for The Associated Press. Follow her on Twitter: http://twitter.com/lsidoti
This piece was first published by Associated Press

Inside Resistance and Scandal in Honduras

Media freedom under assault in US, Report finds