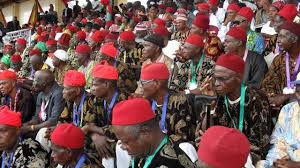 Pericles, a prominent and influential Greek statesman, orator and general of Athens during its golden age once said: “just because you don’t take an interest in politics doesn’t mean politics won’t take interest in you.” Pericles’ words uttered between 495-429 B.C. are still relevant today especially among some apolitical people of Igbo ethnic group of South East Nigeria.

Invoking the words of the Athenian statesman largely responsible for the full development, in the later 5th century B. C. of both the Athenian democracy and the Athenian empire, is apposite in discussing the ongoing squabble between the President of Ohaneze Worldwide, Chief Nnia Nwodo and the Leader of Indigenous People of Biafra, IPOB, Mazi Nnamdi Kanu. Both gentlemen must sheath their swords immediately. It’s high time to put aside disagreements and differences and unite Igbo people all over the world to face a common enemy – those who marginalize Ndigbo. I am talking about the herdsmen. I don’t think its alarmist to say that this is creating the biggest threat to Ndigbos in decades, perhaps ever. People with very different perceptions of reality can’t share the same forever without it eventually resulting in chaos and violence. It still boggles the mind why give them license for their delusional world views. Something needs to give or we are headed for very bad times.

In fact, Ohaneze and IPOB, must understand that it is the desire to be righteous over compassion and listening to others that has taken such thorough hold of Ndigbo. Righteousness is the wall blocking progress toward solutions of known challenges. Certainty is the trap door in progress toward understanding one another and our condition. When righteousness is armed with radicalism in action and rhetoric it becomes extremism. Extremists cannot be shouted down or ignored because every such effort only lends their screams credibility. Ndigbos must set aside their righteousness, recognize uncertainty as life, and seek solidarity. Bold moves make history. In the words of JFK “remembering on both sides that civility is not a sign of weakness, and sincerity is always subject to proof. Let us never negotiate out of fear. But let us never fear to negotiate. ”

I tuned and listened to German talk show hosts discussing in German, about Ndigbo and what actually transpired. But more than what was written and talked about, we were never destined to know the truth, though there was much, which we might surmise. While political arguments have been going on for millennia, arguing did not necessarily mean eviscerating your foe and taking no prisoners (so called ‘do or die’ affair). I suppose I would see things not as inflection points, but as indicative. And what they are indicative of is an exhausted, angry, ‘AWOKE’ Ndigbo youths! We should start working together for the advancement of peaceful coexistence before they run themselves slowly into the ground by default. You don’t have to operate with malicious spirit to do tremendous harm. Insensitivity and hatred are sufficient.

President of Ohaneze Worldwide, Chief Nnia Nwodo, being accused of any form of impropriety, is entitled to make a plea of not guilty. A silence would have suggested his inability to counter argue validly. Some of the German commentators had been telling the President of Ohaneze Worldwide, to clear the air in some of the accusations…..just like telling someone to look for and bring out a black dog in a dark hole; a dog that was never there in the first place. Impossible, you can’t win. He is the elected President of Ohaneze Ndigbo Worldwide, and deserves respect. The eagle does not catch flies. He should not bother with the smallest things, but listen and hear them out.

We can accomplish necessary changes we want for Ndigbos without bloodbath, through forgiveness and mutual respect. All I have to say is that ‘none of us is perfect ‘. Not you and certainly not me. We all make mistakes and say things we wish we could take back. To err is human; to persist in committing such error is of the devil…yes, aulem diabolicum.

Dr. Ossy Ekwueme is a medical practitioner based in Wisconsin, USA.