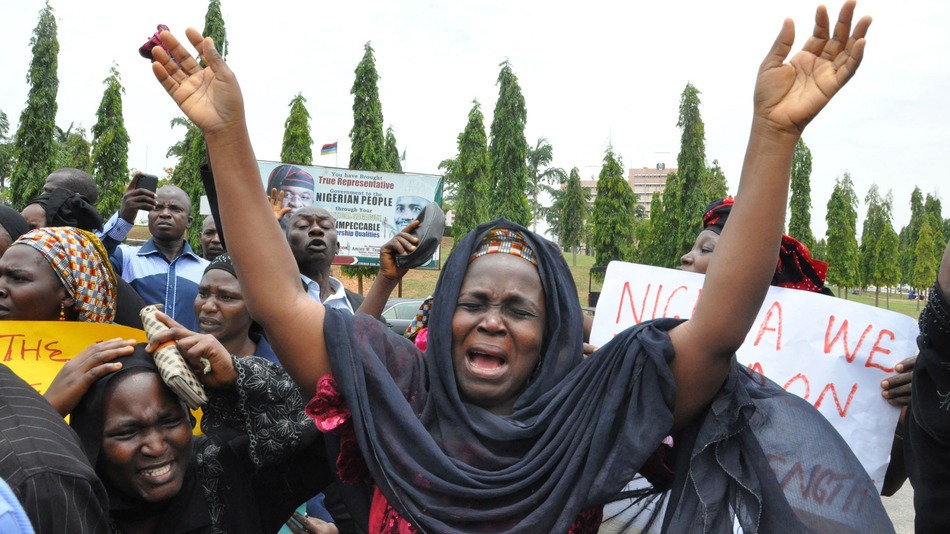 By Uchenna Ekwo
Attending a conference in South Africa two years ago, I engaged one of the conference participants in a conversation about how Africa is not in the radar of the United States and even the international media. Specifically, we focused on the suffering people of Zimbabwe under the iron grip of Robert Mugabe and the utter neglect of the situation by world powers in terms of supporting regime change such as occurred in Iraq in 2003. “Zimbabwe is in an awkward position”, said my friend, “because only countries that export oil or terrorism receive prompt attention from United States or the international media”.

The recent abduction of more than 200 girls in Nigeria by the terrorist organization – Boko Haram and the growing media attention and concern of world leaders unfortunately seems to fit into the narrative that it takes a combination of terrorism and oil for United States, other world powers, and the international media to pay attention. Nigeria exports oil and now developing a terrorist organization for export.
Although Nigeria’s oil deposit has been a source of attraction to US and other countries, but the endemic misrule and rent seeking brought about by massive oil revenues did not earn the type of attention that the nefarious activities of Boko Haram have gained in recent weeks. Even the most ardent critics of the western media’s poor coverage of events and issues in emerging countries will probably agree that the kidnapping of hundreds of young girls have forced Nigeria to make headlines in major world media organizations.

In the United States Congress, I watched with interest on television as legislators especially female lawmakers took turns to condemn the abduction of young girls by terrorists that oppose western education. Similarly, all the cable networks and major newspapers have given the situation the necessary attention. Even Twitter launched a campaign to find the girls. The hash tag #bringbackourgirls took the social media by storm and led the international community to take action. Top US policy makers including Congress, and the Obama administration joined the international condemnation of the girls’ abduction. Former US secretary of State, Hillary Clinton also raised some concerns and pointedly criticized Nigeria’s government what she rightfully described as its “derelict response” to the hostage crisis.

But compared with the missing Malaysian Airlines Flight 370 and 239 passengers and crew on board and the missing 276 girls in Northern Nigeria, the two incidents share some similarities and dissimilarities. Three months on, the world has not found the plane crash victims and three weeks later the world is yet to locate the abducted girls in Nigeria.

There was a coordinated international effort to locate the missing plane and the passengers; France, United States, China, Australia and many more exhausted their naval and satellite capabilities and yet nothing has been found. The world was captivated by the search efforts and still remains disappointed about the absence of any clue as to the whereabouts of the plane and passengers more than three months after the plane disappeared.

On the other hand, only the United States, so far, has signaled the willingness of the Obama administration to assist in the search for the missing girls in Nigeria while other countries remain spectators to what appears to be a spy movie scripted by Islamic insurgents otherwise known as Boko Haram.


The short -attention-span disease in the media is sure to rear its head again as the search for the young girls continue. As the kidnapping of the young girls dominates news headlines around the world, just like the missing Malaysian airliner did at some point, it is likely that the media attention on the missing girls will soon evaporate. Whether the girls are found or not, the campaign to free the girls that has become the toast of different media organizations including citizen journalists that publish in social media outlets will take a nose dive. The emotional outbursts will be diluted by other issues that will certainly come up thereafter.

Consequently, the critical problems of corruption, misrule, unemployment, and lack of patriotism among Nigerians that largely drive the emergence of militant groups and insurgency will be ignored. As the International Crisis Group observed, unless the Nigerian government embarks on fundamental reforms to tackle corruption and unemployment to win the hearts and minds of Nigerians, Boko Haram will be difficult to defeat.

Unfortunately, the audacious activities of Boko Haram coincide with the time Nigeria’s economy jumped past South Africa’s to become Africa’s largest economy with serious ramifications for the country’s image and future economic growth. For example, the government closed all schools and offices in Abuja for three days because it hosted the World Economic Forum in Abuja in the first week of May. The loss of prestige and loss of productivity resulting from the school and office closures can hardly be quantified. Even with such precaution, the World Economic Forum was a failure because few countries participated with key world economic giants in abstention obviously because of security concerns.

Whereas the media attention on the insecurity in Nigeria is good, at least for its news value, it has its adverse consequences. Like in the past, mostly negative news from Africa makes the headlines in the international media while positive news hardly gains traction. In this instance, the news about Boko Haram has denied Nigeria the opportunity of utilizing the hosting of the World Economic Forum to market her new economic strength in Africa and the world.
Again, the renewed media attention in Nigeria has brought to sharp focus the contradictions of Nigeria as a nation state. The forced marriage of different ethnic groups with different cultural identities will remain troubling as any forced marriage ought to be. The struggle for power and recognition remain an integral part of politics in every polity but when disparate entities lack common bonds in terms of language, culture, education, creed, and assimilation of modernity as in Nigeria, there is a huge problem. In the absence of consanguinity as in Nigeria, life will remain miserable and carnivorous, might will be right; and conflict will replace cooperation and consensus.

Therefore, it would be a good thing if Nigeria and the world should focus more on how to deal with the forced marriage officiated by the then British colonial administration. Revisiting this marriage is critical to the restoration of stability in a country where no citizen including the President have faith in Nigeria. While the destructive activities of Boko Haram are condemnable, it may well be that out of every bad situation some goodness may emerge. If terrorist activities could drive Nigerians, the media, and the world to redefine the unholy alliance of a geographical entity called Nigeria to suit the people who occupy that part of the world, so be it.