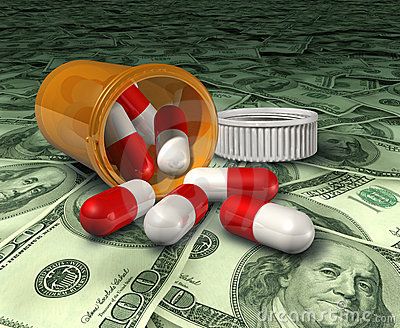 This doesn’t feel like a prophecy; it feels like a simple statement of the apparent truth. I waited for this day when many will realize that the prescription drugs cost is way too high and now the evidence is overwhelmingly disastrous and bankrupting many families.

Contrary to the widely held view that drug costs are high because of the amount it takes for Research & Development of drugs, the truth is that the prohibitive costs of drugs are attributable to the irritating ads that saturate the airwaves and the print media. Yes, marketing costs of Big Pharma eat up about a third of their budget and are about 3 times what they spend on Research and Development (R&D). The only other country that allows prescription drug ads in New Zealand (where drug costs are equally high). A simple act of Congress or a regulation by the FDA could eliminate them.

This whole idea that the high cost of drugs is because of the enormous amount of money devoted to research and development, is patently false. Drug pricing has nothing to do with research and development and even less to do with economic models of supply and demand. It is a perverted corrupt equation determined by drug companies and their contracts with insurance companies and big chain pharmacies.

Having sat at meetings for many years and discussed with other doctors, pharmacists, financial and marketing people in major pharmaceutical companies here in the USA and listening to some European counterparts…one can easily see the difference in process and thoughts. The discussions I had with the European counterparts about their working relationship with the health regulatory authorities on drug prices, marketing, and promotional materials were extremely interesting and were in stark contrast to the situation in the US. They seem to accept that it was normal to find an acceptable compromise between affordability for the patient, safety of the drugs, and profitability for the pharmaceutical company. I never heard any of them say they thought it would be normal to unilaterally set their own prices with no negotiation with the government.

As a medical doctor, I can confirm that patients rarely need cutting-edge medication that will bankrupt them, when tried and true is safe and effective. Unfortunately, generic drugs are sometimes more expensive than brand based on a patient’s insurance. Again, even if approved on an insurance formulary, the price depends on the pharmacy they go and often the price is cheaper if they buy without their insurance.

The enemy we fight is disease and injury and is a far more dangerous enemy than foreign nations. We happily pay for military defense, why not medical defense?

It seems that too many Americans loathe Socialism even more than they do the prospect of becoming gravely ill and dying prematurely. The “health care industry” (including the “pharmaceutical industry”) should be regarded as an oxymoron. Without good health none of the rest matters, and no one should be permitted to profit obscenely off the poor health of their neighbors let alone their own family members). The USA is “exceptional” only inasmuch as it stands alone among all nations in the industrialized world in not offering universal health care under the administration of its government. That clearly needs to end. Health care is the same as national defense. The enemy we fight is disease and injury and is a far more dangerous enemy than foreign nations. We happily pay for military defense, why not medical defense? Doesn’t the government fund most pharmaceutical research? Why shouldn’t the government bargain for lower prices on the fruits of its funding?

Then there are the pushers that infest doctors’ offices. These totally unqualified salesmen, whose, the main purpose seems to be to get doctors to use drugs in unapproved procedures. The purpose of the ads is to get us to ask for drugs our doctors do not think we need while the pushers and the payments are to get physicians to prescribe new expensive drugs even when older cheaper drugs do as well if not better. It has been conservatively estimated that if this marketing is eliminated, it would lower the cost of healthcare by $100 Billion each and every year.

Big Pharma knows individual patients and families are powerless to negotiate. Insurance companies are supposed to negotiate price on behalf of members but in general just because they approve it doesn’t mean they pay for it. The idea being talked about that Europeans should raise their drug prices as a solution to the gouging and predatory drug practices in the US is patently ridiculous. Big Pharma is bankrupting our Citizens, even those with insurance. The absolute take over of private business and the failure of the government to apply any controls has led to out of control costs and benefits for a few. No one resents paying those who research and develop products that benefit the well being of humanity. It is a gift to be able to have a positive impact on people’s lives. Nevertheless, there MUST be limits on costs to the patient.

The Solution: Either negotiate prices and /or follow the examples of other industrialized nations. The industrialized nations except for the USA have national health insurance costing far less. Health care should not be viewed as a privilege for the few who can afford or are willing to surrender their life savings. Greed has supplanted the Hippocratic oath. It’s decades past time for America to rein in the absurd costs allowed throughout the health system. This is the First Step in Medicare for ALL. It’s the fiscally prudent solution for the long-term and the RIGHT thing for all of America. Seriously!

More than 300 years Jonathan Swift wrote about the utility of falsehood: “If a lie is believed only for an hour, it hath done its work, and there is no father occasion for it. Falsehood flies and truth comes limping after it so that when men come to be undeceived, it is too late; the jest is over, and the tale hath had its effect….like a physician, who hath found out an infallible medicine, after the patient is dead”.

Osy Ekwueme, MD, PhD. is a Medical Professional and Policy Analyst based in Wisconsin, USA