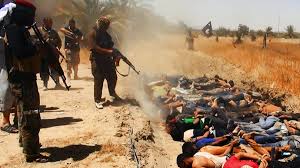 “If it had been your Lord’s Will, they would all have believed – all who are on earth! Will you then compel mankind, against their will to believe?”  — Qur’an [10:99]

The resurgence of barbarism and cannibalism in the Middle East championed by the so called Islamic State of Iraq and Syria (ISIS) is troubling to genuine Muslims and indeed the international community. Media reports about the mayhem and bigotry perpetrated by these groups of Islamic pretenders and ambitious elements suggest that they aspire to establish what I call Illegitimate State of Intolerance and Savagery (ISIS).

Coming from radical Sunni jihadists in Iraq who fought under the banner “al-Qaeda in Iraq” ISIS’  goal is to create a fanatical, extremist, and  puritanical  Islamic Caliphate or state, crossing over the borders of Syria and Iraq. And by extension, a utopian idea and wishful thinking of Islamizing the western world through a radical approach of terror rather than a rational approach of teaching.

It is in this connection that the vision and plot of ISIS can be seen for what it is: misguided and truly un-Islamic. Not even Prophet Mohammed will endorse their dastardly acts of aggression and banditry.

Similarly, the group’s aspiration to create a caliphate is mere bolster and bogus bastardization of the real meaning of the word caliphate. Caliph means, successor in Arabic, and a cleric with this title is regarded by Muslims as an Imam chosen by Allah from the Family of the House of direct descendants of the Prophet Muhammad[PBUH]. Caliphate was initiated by the first and foremost four companions of the Prophet [PBUH], right after his death. They were Abubakar, Umar, Uthman and Ali. However, in the year 40 A.H.[after hijrah or migration to Madinah] or 661 C.E., the last of the fourth rightly guided Caliphs, Ali was assassinated by one Ibn Muljan, [a Kharijite, member of a group that opposed Ali for negotiating with Mu’awiyah, another companion of the holy prophet and an enemy of Ali] as he offered his Fajir[early morning prayer] in the mosque. This unfortunate incident brought the Caliphate of the four notable men to an end.

History has it that, Prophet Muhammad and his companions gave specific orders regarding tolerance and mercy towards the non-Muslims and warned of severe punishment to be meted out to any Muslim who should per chance violate these orders.

Unfortunately, ISIS and its supporters that are expected to be versed in Islamic knowledge have chosen to ignore historical realities due to their ulterior motives and hatred of non-Muslims.

My heart bleeds whenever I watch the brutalities of ISIS towards the innocent Christians and the minority Muslims who refused to buy into their fanatical and radical brand of Islam. Worst still, ISIS has engaged in brain-washing some ill-informed elements in some Western countries to take up arms against innocent victims. As a Muslim, I still do not see the reason why Christians should be subjected into persecution and punishment because of their beliefs.

How would the world be if Muslims who are in the minority in Western countries were compelled and coerced to either leave Islam or leave the country and go to the extent of killing them?

It is an undeniable historical fact that, Christians in Ethiopia were the first people to embrace and accommodate the first Muslim refugees, when they were being persecuted and the Prophet asked them to seek refuge in Ethiopia. King Negus of Ethiopia even refused to hand them over to the Makkan persecutors in spite of the gifts they brought to him. And yet he never compelled them to abandon Islam and join his faith as a pre-condition for extending hospitality to them.

So far, we are yet to hear or see any Muslim cleric who does not condemn ISIS and their modus operandi. From Saudi Arabia, to Asia, Africa and virtually everywhere, Muslims and Muslim leadership are voicing out their concerns about this extremist group which has so far attracted over one hundred American Muslims.

Future of conservative media on focus