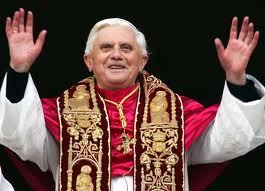 By Osmond Ekwueme
Pure nonsense. The Catholic Church is not in crisis. The haste with which most commentators and some of my colleagues are stumbling over their casuistical feet to explain the sudden abdication of Pope Benedict XVI; as the beginning of the end of Catholic Church is such an inexcusable screed.
The Pope’s decision to step down for reasons of human, bodily frailty cannot be overemphasized. Perhaps he is tired; perhaps he wants to try to get closer to his God; perhaps he wants to turn the job over to someone with more energy and vision. It is very personal decision and should be respected.

Honestly acknowledging one’s incompetence to fulfill divine mandates seems more like an old-fashioned Biblical virtue. It is unfortunate that the horse has already left the barn: the world at large (non-Catholics) already judges the Church at least in part on the Pope’s human qualities. The Pope is both a theological arbiter and the leader of the church. These commentators tend to string together a series of in-the-news memes and then draw a conclusion based on nothing more than vapor. Excuse me for saying so. Having your own opinion is fine, having your own version of history makes you nutty.

As a Catholic it is always a treat for me to be intellectually illuminated by other non-Catholic Christians. I am puzzled that most commentators holding brief for Catholicism do not understand the church for they condemn what they do not understand…condemnant quod non intellegunt. It reminds me of the years, as a student in Europe, of the endless reading of what people thought was going on behind Kremlin walls during the Cold War.

Yes, as is true with any large organization, the Catholic Church has its problems, but how many more decades have to pass before the sexual abuse scandals are placed in perspective? The Catholic Church is argually one of the greatest source of good in the world today since its charities give more to the poor and hungry than any single organization, including the US government. Catholic schools educate children well, not only in religion, but also in reading, writing and arithmetic. Students who went to Catholic schools often write very well.

Some journalists depict the Catholic church as an oligarchy ruled by a bunch of domineering old men who are obsessed with control of their congregation’s behavior, but that story line doesn’t fit the truth. There is no credible foundation for such an accusation and should be summarily denounced. There is a huge difference between advising and controlling. Catholics are free to make their own choices. The Church is the people of God, not the hierarchy. It is the people of God who continue to labor, pray, love and hope despite all. The people of God read, think, consider and make intelligent decisions. They are not sheep blindly following an errant shephard…most of us are very well-educated with multiple academic degrees. We know what we are doing because we know in whom we have believed..and it is Jesus Christ; the Founder of the Catholic Church. Indeed, ..crux spes unica..the cross is the only hope.
I remain a practicing Catholic because the Church has sustained the centrality of the teachings of Jesus Christ through the past 2000 years. The call to Love One another as He Loved people aims to animate the personal lives of each of us. The justice and compassion within modern democracies reflect Catholic precepts. I have been a Catholic my whole life. I have baptized my children in the Church,(the younger ones still altar servers), go to Church on Sundays and on all Holy days of obligations and know all the prayers. I am horrified by all the sexual abused scandals in the Catholic church. Still, it is in the Catholic church where I feel at home when I worship God. In the end it is about our intimate relationship with God, that matters. No church is perfect. I will die a Catholic and I let God do the judging in the end.
The Church is full of human beings as awesome as Mother Teresa and Dorothy Day and as heartbreaking as the perpetrators and each of the rest of us in our own holy and hellish ways. It’s mission to sustain the presence of Christ is divinely sparked. For me and I think many serious Catholics, balancing these forces within the church is a trial like balancing my own humanity and my quest to follow Jesus teachings. Our Faith reinforces and is in turn reinforced by secular laws and mores. The two worlds co-exist and strengthen each other.

The Pope is recognized, by most Catholic and many others as having a significant influence, on the self image of Catholics, the sense of community within Catholicism, the duty we all have to each other and,particularly, to those in need. This week, (Thursday Feb 28th 2013), the 85year old Pope BenedictXVI is stepping down after saying he no longer has the physical and mental strenght to lead the world’s 1.2 billion Catholics. Most Catholics are concerned about the type of person that will be elected new Pope. The vast majority of adherents of the Catholic Church today are from the so-called global South: Central and South America and sub-Sahara Africa. These Catholics subscribe readily to the church’s doctrines and see no reason to hit a system upgrade just because Americans and Europeans are headed for the exist doors. Moreover, these societies do not seem to engage in this kind of pederasty we are talking about. If the Church seeks to represent its congregation, it should elect a leader who looks like the vast majority of it. The third world seem to be the lifeline of the Catholic Church now. The Papal conclave might give the papacy to a latin American or African without actually deviating from the old playbook. The present factors have scrambled the usual calculus. Nigerian cardinal Francis Arinze…well-read, very outgoing and charistmatic or Ghana’s cardinal Peter Turkson come to mind.

As the 117 Cardinals in the Vatican’s sistine Chapel issue the….extra omnes….(outside, all), before the session of the Papal conclave which elect a new Pope; we hope they put this into consideration. Whatever happens, …fiat voluntas Dei…May God’s will be done.