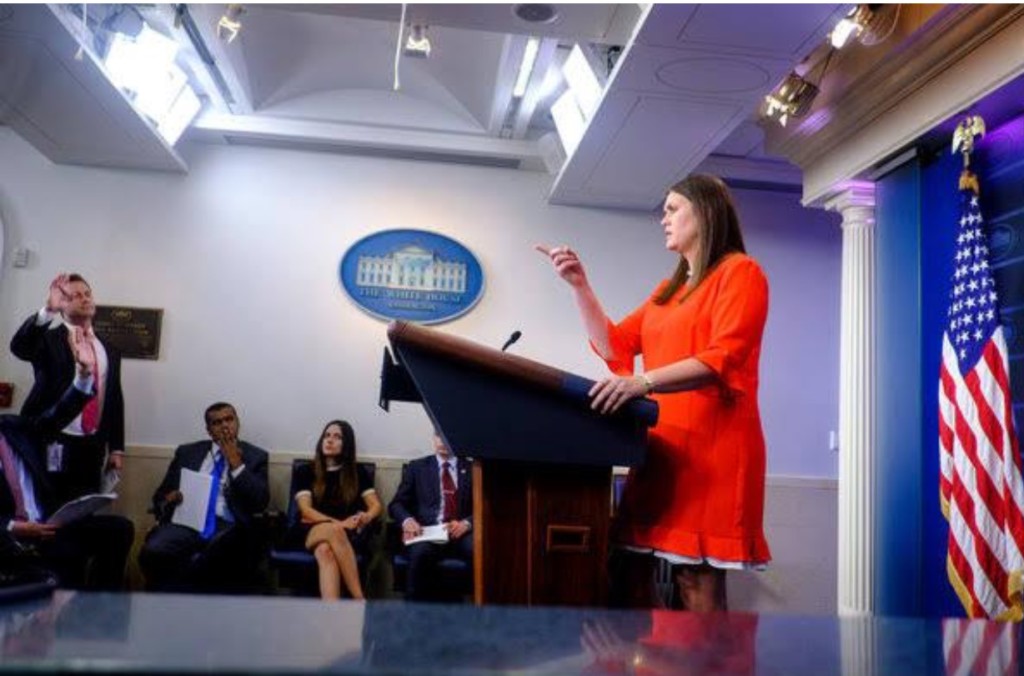 A regular observer of the daily media briefing of Trump White House’s Press Secretary, first, Sean Spicer and now Sarah Huckabee Sanders can confirm the difficulty in balancing the role of serving an unusual president, an inquisitive press corps, and wary citizens of the United States and indeed the world.

From day one of Donald Trump’s inauguration Sean Spicer mounted the podium to announce to a skeptical press corps that the crowd that attended Trump’s inauguration was more than that of Barack Obama in 2008. In that infamous briefing, Spicer declared: “That was the largest audience to witness an inauguration, period.” He then left without entertaining questions including abundant evidence including pictures and numbers released by officials of the Washington Mall that suggested that Obama’s inauguration attracted more people.

From then it became obvious that the already sour relationship between the incoming Trump administration and the media would get even worse in the days ahead.

Ideally, press secretaries are public relations professionals who typically represent a government agency; work with the news media and answer questions from reporters and write press releases for media consideration in a bid to create brand awareness and generate public good will toward their client.

But the job description of press secretaries who serve the government is not limited to serving the interest of the government alone without regard to the interest of the citizens whose tax payers ensure their regular paychecks in the first place. Similarly, the news media that provide a bridge between government and the citizens deserve to be treated with respect by being transparent just as journalists need to respect and empathize with press secretaries who must earn the confidence of the government they serve while advancing the people’s interest.

How these ideals match up with the Trump White House can be debated by different segments of the population including Trump supporters, opponents, and unbiased professionals. What is clear is that serving a president who prefers to manage his own communication with the people can be extra challenging to a press secretary no matter how skilled. Trump is an expert in manipulating the news media through his larger than life personality and bombastic outbursts as well as huge social media following. He is skilled in deflecting media attention from a negative portrayal of his behavior to other things with little efforts. Through the incredible use of his twitter account, Trump torpedoes the best efforts of his communications team to advance administration’s policy priorities. He lacks the needed discipline in delivering his message thereby complicating the job of his media team. In many instances, the president is his own worst messenger even when he has a good message to push through.

For example, in his first address to Congress that was considered very presidential and well received, Trump himself changed the subject by a single tweet that alleged his predecessor President Obama “wiretapped” his New York Trump Tower without evidence. He made it hard for the press secretary to speak more on the good speech he delivered to Congress the previous day and put the team in an awkward position of explaining to the press the unfounded allegation about wiretapping.

Trump has a negative image in the media and he believes his communications team is not doing an excellent job. But how can a press secretary launder an image of a president that constantly shoots himself in the foot; that fouls the air too often only to leave his aides to clean up?

In a current address to the police association in Long Island in New York, President Trump urged the police to be rough on suspects and he received criticism for encouraging police brutality. The new Press Secretary, Sarah Huckabee Sanders in defending the president’s remarks claimed that the president was merely joking. In another incident, Sanders, confronted by reporters on the President’s discredited claim that the President of Boy Scouts Movement called him and praised his speech to the annual gathering of the apolitical movement, she struggled and equivocated especially in the light of the movement’s condemnation of the political nature of the speech.

In a situation where the president conducts public policy via twitter, as recently as the ban on transgender individuals’ service in the military, with little policy input by his advisers, it is difficult for the press secretary to defend policy goals especially those with wide ramifications. This probably explains the tactics adopted by Spicer in his last days of his service as White House press secretary. He responded to reporters’ questions with such comments as “the president’s tweet speaks for itself” in an apparent frustration at constantly explaining the zig-zag of President Trump Twitter policy somersaults.

Sarah Huckabee Sanders on the other hand, deflects questions about the veracity or otherwise of Trump by making references to Barack Obama and Hillary Clinton. Unable to defend the president, she will cite Clinton’s Benghazi and email problems as well as Obama’s lie on the healthcare policy in which he infamously said: “if you like your doctor you can keep it”.

The obsession with the term “fake news” is indeed laughable and shameful because dealing with fake news or fake media outfit amounts to complicity to knowingly deceive the public. With the energy dissipated so far in undermining the news media, one would have expected that the administration will distance itself from Trump’s litany of fake news such as CNN, New York Times, Washington Post etc.

Instead, the administration and especially Trump himself who is reportedly an avid television viewer continue to use the so called fake media when it suits them. In other words, any news organization that criticizes the administration is fake while the few that sees no wrong in the administration are considered legitimate organs. Regrettably, that is not the way the news media functions. The media is supposed to put a spotlight on the government for citizens to understand the activities of elected officials who represent them.

Media and Democratization in Africa