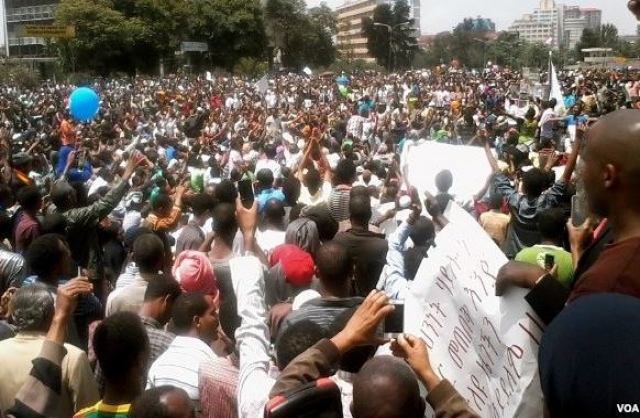 Thousands of people staged a peaceful protest in Addis Ababa on Sunday in the first large-scale gathering of its kind and a rare show of public opposition in more than eight years.

In less than a week after hosting the African Union 50th anniversary celebrations, Addis Ababa witnessed huge crowds of protesters Sunday demanding social and political reforms from the Ethiopian government.

A VOA news report said the demonstrators were seen shouting and urging the government to protect their human rights, and releasing all political and religious prisoners. The protesters accused the state-run television of bias and serving as  propaganda tool for the regime.

“We have been raising lots of questions for the government and one is to release those political party leaders and journalists,” said Getaneh Banch, a member of the Blue Party, the opposition party that organized the demonstration. “And we have been also calling for the government to release also those who have been dislocated from their locations, because of their ethnic background.”

This was the first political demonstration since the 2005 elections, after which many protesters and opposition leaders were imprisoned.

One of the opposition leaders jailed after the 2005 elections, Jacob Hailemariam, says this demonstration is significant for Ethiopia.

“This will definitely encourage people to demand their rights that they have been very quite about, until today,” he said.

Many of the protesters were young men with a Muslim background who do not necessarily support the Blue Party, but do feel a change in government is needed.

“I am not happy with the political party of this nation,” said Mustafa, a high-school teacher. “I never support this party because if I am a citizen I cannot believe in what I believe. We are suffering too much, our leaders are in prison.”

University student Shimelis says he does not expect any immediate change, but still feels it is important to be present.

The Blue Party says it will organize more demonstrations if Ethiopia’s ruling party does not respond to its demands within three months.

US Media’s obsession with the trivial

In search of Democratic Alternative in Iran

Democratization of information and imperatives of sustainable development