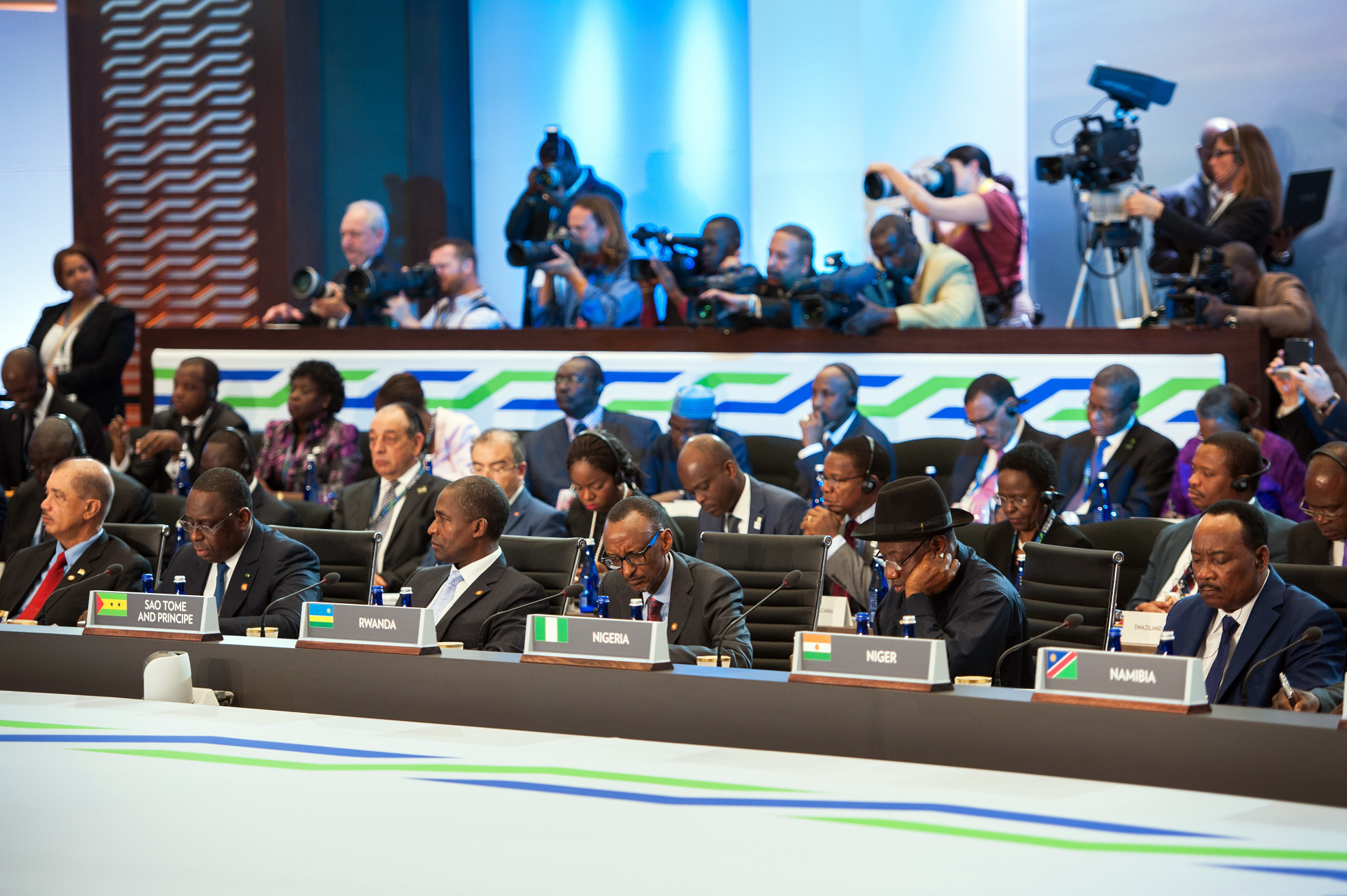 As the international press corps waited for President Barack Obama’s press conference inside the State Department auditorium to zip the three-day US-Africa Leaders Summit in Washington DC, I was engaged in a discussion with two journalists from Nigeria and Cameroon who came to cover the summit. Both reporters —Amarachi Ubani, Chief Foreign Affairs Correspondent of Channels Television, Nigeria and Akanga Ebenezer Teba of the Cameroon Radio Television (CRTV) argued that the summit was organized for the benefit of United States and not Africa.  While, I acknowledged their reasoning, I also tried to convince them that Africa stands to gain if the continent’s leaders should change their behavior.

In the end, only one question by Nairobi’s Standard newspaper specifically referenced Africa and the Summit that necessitated the press conference in the first place. All other questions focused on Israeli-Palestinian conflicts, the Ukraine- Russia imbroglio, Immigration reform, use of executive authority by the president and other domestic policy issues. As reporters who travelled from Africa filed out in disappointment and despair, I recalled my earlier conversation with Amarachi and Ebenezer just before the press conference got underway to the effect that the summit was for the benefit of America.

Nothing exemplifies the ignominy of Africa in international policy agenda than for the President of the United States to hold a press conference to discuss the outcome of a three day summit that literally uprooted Africa to Washington DC only for reporters to divert the attention of the president to other issues. There are lots of blames to go around for the anti-climactic display at the final event of an otherwise successful summit.

Whatever happened to the ordinary intelligence of the handpicked reporters? Admitted that reporters want to seize any moment to extract responses from the president on volatile issues that are news worthy, the reporters behavior once more fits into the narrative that Africa is not important to the western media. To the credit of President Obama, the summit barring other criticisms was supposed to be an effort to show case Africa to the world, demonstrating the progress in the continent that is markedly different from Africa of 20 years ago riddled with poverty, incompetence, and wars etc.

I expected the reporters to focus on how Obama can deliver on the promises to Africa amid the toxic environment in Congress.  For example, how can Obama get the stingy Congress to support the $33billion in new trade and investments that he announced at the summit to help spur African development and support tens of thousands of American jobs? What is the evidence to prove that the Obama administration has tripled the goal of Power Africa Initiative and now aim to bring electricity to 60 million African homes and businesses? Moreover, what is the prospect of renewing the African Growth and Opportunity Act in the wake of partisan gridlock in Washington? These are questions left unasked and unanswered because of the sloppiness and skewed mentality of the White House press corps.

On the part of the president, he should have called the reporters to order to concentrate their questions on the topic of the day which was Africa. Similarly, the White House Press Secretary, Josh Earnest also screwed up by failing to select journalists from the pool of reporters who travelled all the way from Africa to attend the summit. It would have been an opportunity for such reporters to ask Mr. Obama pointed questions in relation to closed door sessions he had with the African leaders. This is important because many African leaders are secretive and would never reveal the agreements with Obama on a wide range of policy issues.

In consequence, it becomes difficult for the reporters to hold these leaders accountable back in their home countries. At the press conference, Obama called the meeting “an extraordinary event” that can be “a forcing mechanism for decisions and action, so we agreed that the U.S.-Africa leaders summit will be a recurring event to hold ourselves accountable for our commitments and to sustain our momentum”. Everyone knows that the greatest challenge in leadership is accountability. The problem is more acute in Africa and Obama’s press conference should have put a spotlight on key agreements that could become a basis for further reporting by journalists in their home countries.

The massive gathering of nearly 50 African heads of state and government in Washington DC allowed top U.S. officials to broker deals between American companies and African dignitaries, as well as press privately for action on security and human rights concerns. The Obama press conference should have helped to reveal the nature and type of deals signed on by US and Africa. The absence of rule of law and media freedom in most African countries might turn the good intensions of those deals into private benefits of individuals instead of the state. I say this because African leaders are used to attending summits and signing protocols but implementation remained a problem and the existence of weak institutions and castrated media system make it impossible to hold the leaders accountable. This is why the only question asked by an African reporter at the press conference that has resonance in Africa is particularly instructive.

Kenyan reporter, David Ohito of Nairobi’s Standard, asked:  “You have been hosting African kings, prime ministers and presidents for the last three days. But back home in Africa, media freedom is under threat. The work of journalists is becoming increasingly difficult. In Egypt, our Al Jazeera colleagues are in jail. In Ethiopia, dozens of journalists are in prison. In Kenya, they have passed very bad laws targeting the media.  What can the international community do to ensure that we have a strong media in Africa and, more importantly, to secure the release of the journalists who are behind bars?”

This question encapsulates Africa’s challenge in having a robust democratic experience. And President Obama’s response is a classical solution to the problem. Hear him:

“Well, first of all, with respect to journalists in the media, the last session that we had on good governance emphasized that good governance means everybody has a voice, that government is transparent and, thereby, accountable.  And even though leaders don’t always like it, the media plays a crucial role in assuring people that they have the proper information to evaluate the policies that their leaders are pursuing.

And so we have been very consistent in pushing governments not just in Africa, but around the world, to respect the right of journalists to practice their trade as a critical part of civil society and a critical part of any democratic norm.  The specific issue of the Al Jazeera journalists in Egypt, we’ve been clear both publicly and privately that they should be released.And we have been troubled by some of the laws that have been passed around the world that seem to restrict the ability of journalists to pursue stories or write stories. We’ve also been disturbed by efforts to control the Internet.Part of what’s happened over the last decade or two is that new media, new technology allow people to get information that previously would have never been accessible, or only to a few specialists.And now people can punch something up on the Internet and pull up information that’s relevant to their own lives and their own societies and communities. So we’re going to continue to push back against these efforts.

And so the good news — and we heard this in the summit — is that more and more countries are recognizing that in the absence of good governance, in the absence of accountability and transparency, that’s not only going to have an effect domestically on the legitimacy of a government, it’s going to have an effect on economic development and growth.  Because ultimately, in an information age, open societies have the capacity to innovate and educate and move faster and be part of the global marketplace more than closed societies do over the long term”.

This should be instructive to many African leaders. If that is one lesson learned from US capital, Washington DC in 2014, it will go a long way to shaping Africa’s future.

Hordes of reporters at the Summit’s International Media Center