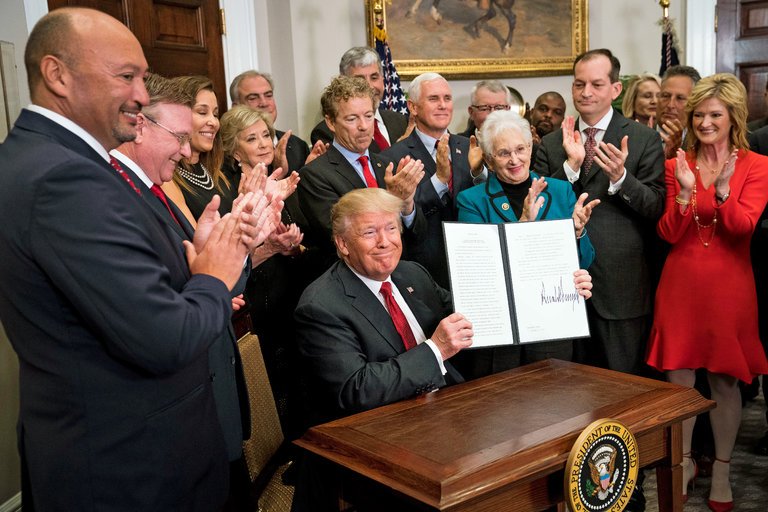 In the wake of the failure of Congress to repeal and replace the Affordable Care Act, President Donald Trump is moving to dismantle the law with executive order that he announced today. What cannot be achieved by legislation, the administration aims to destroy by dictation using the pen instead of the gavel.

Regardless of the opposing viewpoints on healthcare in the most prosperous nation on earth, it is sickening that we have to fight this again. It’s exhausting. While some may dispute whether healthcare is a human right, the lack of universal health coverage in a wealthy democracy is a severe, unjustifiable, and unnecessary human wrong. Every other developed country in the world conceptualizes healthcare as a right. No other country does healthcare as a profit market like the United States. While Trump’s Executive Order to end the ACA as the law stipulates, the effort might end like the Graham-Cassidy attempt to gut ACA.

Some colleagues in the medical profession have only derision and contempt for the failed Graham-Cassidy bill pejoratively described, as Health Care Evisceration Act (HCEA) is a demonstration of abnormal politics and gutless travesty inspired by contempt for the constitutional legislative process. Yes, it is a weeping tragedy that the problems associated with the Affordable Care Act (ACA) could well have been addressed and repaired with a spirit of cooperation for the common good during those 7 years but some politicians were having none of it. Why is this brazen refusal to admit error when proven wrong over and over again about the ACA? This idea that they have to repeal and replace because they promised to do so, is out of touch with public opinion. Just admit you were wrong and that you are willing to put Americans first by working across the aisle to come up with a plan that actually do the other half of your promise…to provide affordable health insurance to all Americans.

Granted, the ACA has it’s problems…giving the insurance industry too much input which resulted in high costs, high deductibles for above average income earners which were still unaffordable. Health care in America directs massive subsidies to the insurance industry that “processes” claims. The administrative costs are simply profit for pushing paper. Medicare is far more cost effective in terms of transferring dollars into healthcare. It actually does what it was designed to do, at a very low cost…it’s administrative overheads are miniscule. The ACA did not “blow up” the health care system. It puts Band-Aids and tourniquets on a moribund system. Politicians keep trying to rip off the tourniquets and can’t fathom why people are angry about it. The rhetoric makes the argument more polarizing than it’s substance deserves.

Sadly, good health has evolved from a right to privilege and very lucrative commodity. Universal healthcare does have it’s pros and cons, but it takes the power of regulating the cost out of the hands of private insurance industry whose eyes are on bottom line profit alone. Health care is not a commodity; every one should have access to decent medical care regardless of their ability to pay. This can only happen if those who have much give some to help those who have little. This transcends party lines, morality or compassion… It is a reality that some level of universal health care is a practical necessity. I can hear a push back from many saying something like “Oh no, no, no. Oh my God socialized medicine, waiting list, etc., we don’t want that.” Trust me, a waiting list is better than no care or bankruptcy for surviving family.

Why is socialized medicine a bitter pill? It works in every other first-world democracy. The only reason that socialized medicine would ever be a bitter pill would seem from some, having to reconcile with the cognitive dissonance of their current arguments. To wit: On one hand, they claim that the US is the most highly taxed nation in the world, and seek to reduce taxes, and on the other hand, they claim that the cost of providing socialized healthcare would raise taxes to European levels. Lest we forgot, we already have single payer, but unfortunately, it has a preexisting condition; you have to be 65 or over to use Medicare. So why not simply expand Medicare eligibility to eventually include everyone. Medicare works, and it can be made to take care of everyone. Making healthcare a right will take it out of continuing political struggle. A public-option alternative to for-profit health insurance could prove both enormously popular and more cost effective, so why not give it a chance? Allegedly this country, in the preamble to the Constitution, was created to promote the general welfare. First we added education for all, built roads that all use, created social security. What is so distasteful about the idea of universal health care?

Most physicians like myself subscribe to the broader idea of first do no harm. Hippocratic Oath means a lot to most of us, especially the part to do no harm. Healthcare should be a right, not a privilege. The totality of the Graham-Cassidy bill was the equivalent of political Munchausen by proxy disease. It’s a policy based on false premises that helps those who don’t need it and places more burden on those who can’t afford it. How about those who did not sign up and who have no health care? Since the bill is so uncivilized, perhaps the victims of gun violence and traffic accidents should be shunted into a “special room” in the emergency room and allowed to die from their injuries so that they don’t cost society any added expense. I also try to fathom a bill that cuts spending on Medicaid, the program that pays for 60% of the people in nursing homes at a time when the number in nursing homes is set to go up. Good people, who paid taxes their whole lives, do not deserve to die uncared for. The bill does a lot of other damage, but that one thing alone should worry most of you. We do not die quickly in our sleep, before our wealth is exhausted. Sure most of us won’t be part of that 60%, but one unlucky fall, a stroke, a bit of dementia, and best made plans fall flat. Yes, some people still believes that Healthcare is a commodity, which should be allowed to float on free market. People who can’t afford it should be allowed to die.

These bills do not genuinely create circumstances in which no American has to spend sleepless nights fretting over how they are going to pay their bills if a loved one faces a significant health problem of any sort. Does anyone in Congress asks, ‘What if this was my family?’ Even ACA (Obamacare), although it makes some zigzaggy strides in that direction, still doesn’t do an adequate job addressing it. We seem to keep on forgetting one of the universal truths of almost all religions and most successful institutions and organizations throughout the year…Do to others what you want them to do to you.

The big problem here with the “system” is that it’s not actually one system….lots of insurance companies attempting to make profits will naturally drive prices up, but they also lack the proper leverage to get properly low costs when it comes to procurement….which is why drug costs are so high compared to those in the UK or Canada. We should stop calling them health insurance companies because what they offer is not really insurance but a banking scheme to make money. Their management is not needed and is of no value other than to make their investors more money. The fact that they insist on having the right to deny coverage to those with pre-existing conditions and offer programs that offer almost no real benefits proves this point.

Again, I keep thinking back to the Times article a week or so ago that noted 91% of Congress considers itself “Christian”. If that is really true…then Jesus must be really angry. Jesus did not turn away the sick and the infirm…he embraced them and worked his own miracles to make them better. Human kind may not be able to work miracles, but modern medicine and a reasonable amount of money (in the form of taxes and mandates) is sufficient to cure or mitigate a vast amount of suffering. If Christians in Congress would live up to their name, they would discover that repealing the ACA without offering a better replacement…. which will surely cost lives and greatly increase suffering among the living…is not something compatible with Christ’s example.

Biden America in the eyes of Arabs