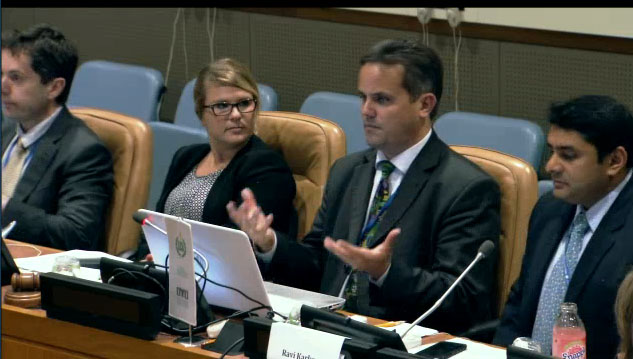 Youth development and engagement processes, as well as the of future ICT infrastructure, grabbed the attention of participants at “The Global Challenges Giving Pledge Conference,” held at the United Nations Headquarters in New York. Organized by the International Association for the Advancement of Innovative Approaches to Global Challenges (IAAI), and the World We Want 2015 (WWW2015), the forum discussed issues about effective multi-stakeholder engagement, especially led by the youth.

Miroslav Polzer, from IAAI, opened the meeting touting the efforts of his organization to deal with knowledge diffusion, the use of ICT, creativity, and encouragement of youth participation. In addition to the conventional approaches normally adopted by non-profits, he also saw music as the new way to engage youth through participation in music production and concerts. He emphasized the necessity of mobilizing and engaging young people adding that IAAI intends to organize a big concert during the Paris Climate Summit.

“It is a clear sign of systemic failure that 85 people today own half of the world,” he said. “Therefore, a new global culture of sharing resources will be the main priority, with a common global approach, the inclusion of future generations.”

Ravi Karkara, a leader of a policy strategy group associated with the World We Want, maintained that partnership was key arguing that “knowing how to co-create and co-own capabilities are the main lessons.” He also expressed the need for open source technology and behaving, using it transparently.

He noted the great heterogeneity in the participation of civil organizations, especially by the aging communities, which is trying to learn social media to advocate for the elderly. “We need to promote inclusion in the very clear objective, strengthening of people’s voices and collective action,” he said.

Ras Mubarak, CEO of National Youth Authority of Ghana, saw the coming transformation based on productive employment to eradicate youth inequalities. “Youth represents not only just future, but also the future economy and other global agendas,” he said. He suggested a youth led process, sustainable development agenda, with a market economy and creative financing.

He especially emphasized the need for promoting ICT hubs (Internet Communication Technology), mainly for the people who were left behind in the ICT age, such as the people of Africa and Asia region. He mentioned worldstats.com, which informed him that Africa is still behind in internet access even though Africa occupies about 15.7% of world population. In the same context, he also thought that young Africans need entrepreneurial coaching to become successful and eradicate extreme poverty.

Michael Mullane, from European Broadcasting Union, the head of Eurovision Social Media, which is the biggest broadcasting brand in Europe, said that youths are resenting against the fact that they are called in whenever they are needed, used and later left behind. His objective is to help young people shape the future by themselves and he believed that people can make a difference only by cooperating with youth.

To hold the attention of youth, he agreed with the necessity of attracting the real interest of youth, by making something watchable, not another boring documentary. To achieve that goal, he said that he will be willing to support the Musical event being organized by Miroslav during the Paris Climate Summit.

Jordan Brown, the executive account manager of razoo.com, spoke about the new way of fundraising to achieve the agendas which was discussed earlier. She explained the significant growth of crowdfunding. Just like razoo.com and funds.gofundme.com, crowdfunding is a new trend in fundraising. Crowdfunding, which allows the random public to support certain fundraising campaigns and the idea of people much more easily and joyfully, is gradually growing. This crowdfunding platform is open to whoever wants to take an action. Last year, $16.2 billion was raised globally. Its scale is increasing gradually, and over $35 billion is expected to be raised in this year. Many organizations started to set up the fundraising page on the crowdfunding platforms, such as razoo.com and funds.gofundme.com. For example, CMPI Media (Center for Media and Peace Initiatives) set up the crowdfunding page on both crowdfunding websites to raise money for its new ‘Youth Media Project.’ This project is a youth development program to enable young people to engage in mainstream media, avoid soft news, and implement proper intelligence to filter the noises and choose the right information.

Another perspective about fundraising was also discussed. Eliane Sussman, the director of Programming of Global Sustainability Foundation (GSF), expressed a desire to differentiate her organization from others. Rather than just giving grants to non-profits, they decided to take 3 different ways of support – Sharing of knowledge, providing resources (not only in financial aspects, but also other aspects too), and helping them to make proper network and partnership. She said her organization considered the sustainable strategy and partnership as the essential factors to make a successful campaign. She also agreed with the importance of youth development and necessity of supporting youth’s ideas.

After all the presentations, there was a debate. Arguments were also made by the panelists and the audience in favor of educating girls, the use of smartphones with radio options, automation of language translation services, creating office space for emerging women’s organizations, the need for an ICT strategy combining off-line and on-line tasks and content, the need for the African rich to start giving, joining the global philanthropy and the need for media organizations to join the negotiations on sustainable development.