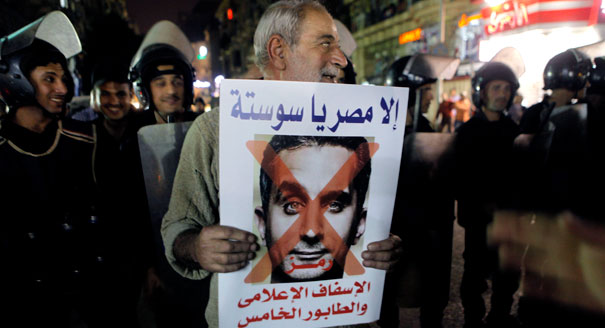 Four foreign journalists were honored with Press Freedom Awards on Tuesday evening recognizing their work in the face of severe reprisals, including physical threats and imprisonment.
The Committee to Protect Journalists’ 2013 International Press Freedom Awards were presented to Ecuador’s Janet Hinostroza, Egypt’s Bassem Youssef, Turkey’s Nedim Sener and Vietnam’s Nguyen Van Hai in a ceremony at Waldorf Astoria New York.
Hinostroza, a TV journalist for the private Ecuadorean channel Teleamazonas, was forced to take a leave of absence from her morning news program after receiving death threats to her and her family over a report linking a relative of the president to a loan scandal.
“Right now, my country is going through a difficult time. The powerful have taken over the word and have turned the right to express oneself freely into a public service, bound and controlled by political power,” Hinostroza said. “The power of the word has succumbed to the power of money.”
Outside the hotel, a large crowd of Ecuadoreans protested against Hinostroza. Arianna Huffington, who presented the award, said the protests were part of a government-sponsored campaign to discredit Hinostroza.
Egypt’s Youssef, meanwhile, expressed incredulity at even receiving his prize.
A former cardiac surgeon who gained notoriety posting satirical newscasts on YouTube before becoming the host of a show on Egyptian TV, Youssef was charged with insulting the president and Islam in 2012. He was detained briefly in 2013 and fined.
“It is really amazing to get this award, considering the fact that I am not even a journalist,” said Youssef, who received his award from American comedian Jon Stewart, host of “The Daily Show,” to whom he is often compared.
“I am extremely honored to be even mentioned in the same sentence with those incredible freedom fighters from Turkey, Ecuador and Vietnam,” he added.
In November, Youssef’s show “Al Bernameg,” or “The Program,” was suspended shortly before airtime. The Egyptian satellite TV channel, Capital Broadcast Center, cited contractual and editorial differences.
Sener, an investigative journalist with Turkey’s Posta newspaper, dedicated his award in the memory of Hrant Dink, a journalist whose death he blames on the Turkish intelligence service.
Sener spent a year in jail awaiting trial on terrorism charges following allegations his reporting had contributed to an anti-government plot. He is currently free on conditional release but faces up to 15 years in prison if convicted.
“Turkey is a record breaker. Sixty journalists are jailed there on the accusation of being terrorists — that’s more than anywhere else in the world,” Sener said. “Most recently, several colleagues received life terms after a trial that shocked the Turkish press corps. I feel compelled to speak for them now. Don’t be indifferent to their fate! Demand their release!”
Vietnamese blogger Hai was unable to even attend the ceremony as he is serving a 12-year prison sentence under a law that bars “conducting propaganda” against the state.
Speaking via Skype on a video shown during the ceremony, Hai’s son Nguyen Tri Dung said the award made him and his family feel safer.
Lara Logan, who was slated to host Tuesday’s ceremony, stepped down after being placed on a leave of absence by CBS Tuesday over serious errors in a “60 Minutes” report on the attack on the American compound in Benghazi, Libya.
“Given the circumstances, Lara Logan did not want the fact that she was hosting the dinner to take attention away from our award winners,” CPJ chairman Sandy Rowe said in a statement.
Paul Steiger, president and editor-in-chief of the nonprofit investigative news group ProPublica and former managing editor of The Wall Street Journal, was given the Burton Benjamin Memorial Award for his lifetime commitment to press freedom.
The annual Press Freedom Awards seek to recognize the type of “courageous reporting that defines free media,” the committee said in a statement.

Journalism: many publishers, no editors