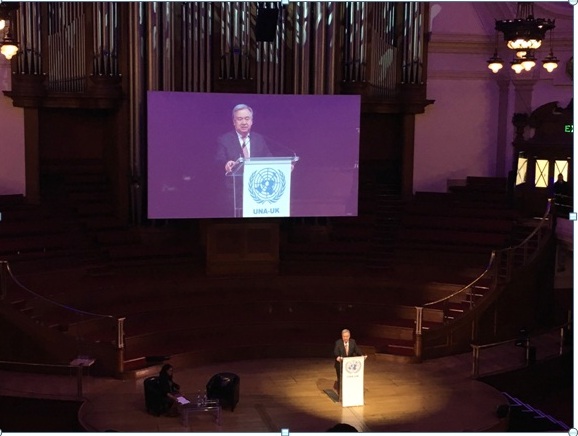 In his first speech in London since taking office in January, UN Secretary-General, António Guterres has outlined plans for a more nimble, modernized and responsive United Nations, touching on sensitive issues including the restructuring of the International Criminal Court.

Framed like the US President’s  ‘State of the Union’ address, Mr. Guterres discussed the increasing inter-connectedness of security, development and humanitarian concerns, pathways for UN reform to respond to today’s challenges, and the future relationship of the UN with the United Kingdom.

“We need to be able to respond to the challenges of the present, but also to anticipate the problems of the future.” Mr. Guterres told his audience at the Central Hall in Westminster. “There is no solution to global problems without strong, multilateral institutions.”

Mr. Guterres called for greater coordination among departments, reduced bureaucracy, modern communication tactics and a revamped counterterrorism structure. While championing change, he remained conservative in outlining concrete plans to alter the structures of the International Criminal Court (ICC), whose membership and support are dwindling, or of the Security Council, currently at an impasse between Russia and the US. Kofi Annan, the seventh UN Secretary-General, failed to achieve consensus on his 2005 proposal to enlarge and reform the council. His predecessor Boutros Boutros-Ghali had proposed radical changes to the UN financing system through global taxes, but the plans failed following the US veto of his candidacy for a second term.

A former Prime Minister of Portugal, Mr. Guterres served as UN High Commissioner for Refugees from 2005 to 2015. He said Wednesday that witnessing the hope and courage of refugees has been his most profound life experience

The ninth Secretary-General told the hall at the United Nations Association – UK (UNA-UK) event that the UN must instill a sense of trust and caring and called for civil society involvement. A lack of opportunity, he added, has been a central motivator for foreign fighters and participants of armed groups, as many individuals and communities feel left behind amidst rapid globalization.

In true diplomatic fashion, the Secretary-General refrained from commenting in detail on hot conflicts of individual member states such as Syria and South Sudan, preferring to shed light on the breadth of the UN priorities in promoting peace and stability globally — beyond the mainstream media daily headlines.

He highlighted the conflict in Mali to underscore the need for more nuanced and robust counter terrorism and peacekeeping operations. To achieve sustainable peace, Mr. Guterres said the United Nations must consider interrelated political, historical and socio-economic grievances and while countering obstructionist terrorist and rebel groups.

Recognizing sexual abuse cases among UN ‘protectors’, Mr. Guterres promised changes in the management process of peacekeeping operations and greater transparency and accountability. In exchange, he asked for more responsibility and freedom of movement, citing stringent regulations such as approval from all 193 member states in New York to create a single, technical position at the headquarters in Geneva.

“Sometimes, we live more with the allusion of power than with power itself,” he mused.

The UN human rights agenda, he added, is losing ground to the national security agendas of member states.

In her first address to the UN General Assembly in September 2016, Prime Minister Theresa May affirmed her commitment to partnering with the UN to uphold human rights and contribute to global development. ‘The UK will be a confident, strong and dependable partner internationally – true to the universal values that we share together,’ May said in her speech.

She added that the UK would honour a commitment to spend 0.7 percent of Great Britain’s gross national income on foreign development to reduce poverty and instability. Discussing issues of terrorism, the migration crisis and modern slavery, May echoed the rhetoric of the Secretary-General in recognising some communities feel left behind in the wake of rapid globalisation.

The two leaders also agree on addressing present and future challenges through cyberspace and artificial intelligence regulation, although it is unclear whether Mr. Guterres would support wide-sweeping data collection along the lines of May’s Investigatory Powers Bill, which passed through Parliament last June.

On climate change, the Secretary-General displayed optimism — not because national governments would prioritise reform over other concerns, but because ‘green business’ has become profitable. The private sector will lead sustainable progress, he contended, also hinting at greater collaboration with the private sector to achieve global sustainable development goals.

After the speech, event chair and UNA – UK Executive Director Natalie Samarasinghe took pre-selected questions from the audience. The questions and Mr. Guterres’ responses are paraphrased below:

During the event’s opening remarks, Rt. Hon. Baroness Anelay of St Johns DBE — Minister of State at the Foreign and Commonwealth Office with responsibility to the UN and also the Prime Minister’s Special Representative on Preventing Sexual Violence in Conflict — stressed the need for a more nimble, less centralized UN, emphasizing delivery over bureaucracy. Lord Stewart Wood of Anfield underlined the ‘Keeping Britain Global’ agenda within UN-UKA.

The ‘Keeping Britain Global’ report, published this month in response to the Brexit decision, calls for a cross-departmental strategy for strengthening the UN, merit-based senior appointments, deepened civil society engagement on foreign policy issues through the Global Britain Fund, and an increase in funding to the Foreign and Commonwealth Office for UN-level projects to justified the UK’s continued place as a permanent member on the Security Council.

The United Kingdom is also a founding member of the United Nations and the fifth largest financial provider.