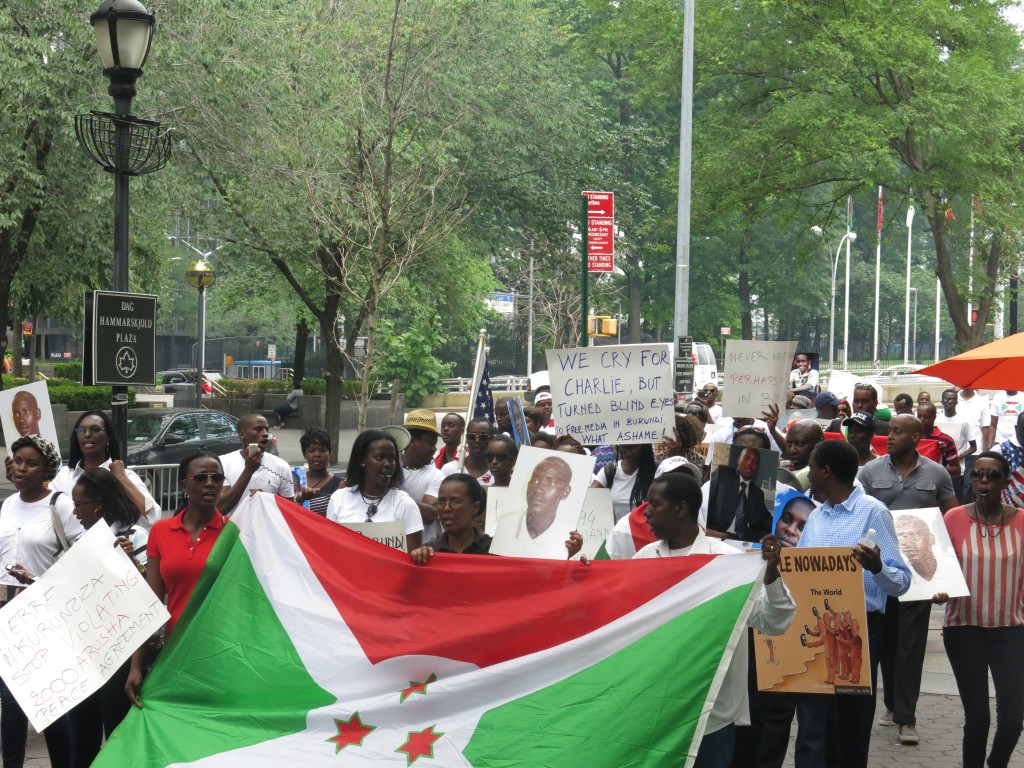 Slow diplomacy may not be good enough to resolve a kindling crisis in Burundi.

The African Union concluded its 25th Summit today without a firm position on political pandemonium in Burundi. But Burundians are taking a stand against the weak stances of the international community in condemning President Pierre Nkurunziza’s attempt to run for a third term. About 50 Burundians from across the United States gathered in New York on Friday to rally in front of the United Nations.

According to an organizer of a rally in front of the UN on Friday, the international community has not gone far enough in declaring Mr. Nkurunziza’s candidacy a violation of the Burundi 2005 Constitution and the 2000 Arusha Accords and in taking definitive action amidst the crisis.

“We would like to tell the world this cannot be tolerated.” rally organizer Met Ndikumana said. “It’s a matter of preventing an all-out war and preserving Burundi’s existence as a democratic state.”

Burundi has been a hotbed of violence and growing international concern since President Nkurunziza announced his bid for a third term in August. As protestors took to the streets, the ruling party the National Council for the Defense of Democracy-Forces for the Defense of Democracy (CNDD-FDD) responded by firing on protestors with tear gas, water cannons and live ammunition, jailing opposition leaders and banning independent media outlets. About 100,000 refugees have fled to Rwanda, Tanzania and the Congo to escape government threats, police brutality and the infamous “Imbonerakure,” or youth militia.

A military coup on May 13 attempted to overthrow Mr. Nkurunziza, but the putsch failed and he returned to power later that day. Amidst growing unrest and urging from the East African Community (EAC), Mr. Nkurunziza postponed the presidential vote to July 15. Today, the African Union called for further postponement and dialogue in Burundi, and agreed to send military experts to advise police, but did not make a statement about the president’s candidacy.

Mr. Nkurunziza argues that his first five-year term did not count because he was installed by a vote of Parliament and not by general election.

“He wants to stay in power to hide what he did in his party from the country. We thought he came into power to do good. The people are dying every day. He did nothing. There’s no freedom of the press, no democracy. He robbed the country,” Rally attendee Nadine Niyindemesna told CMPI in French.

Friday’s rally included protest chants with traditional Burundi rhythms, marches around the streets in front of the UN, a collective singing of Burundi’s national anthem “Burundi Bwacu,” a local prayer for the nation and a minute of silence for those who lost their lives to police brutality in the last seven months. Waving flags, signs demanding the president step down to preserve peace, and photos of deceased victims of police brutality, the crowd came together to chant in the local Kirundi through a blow horn and clap hands to the beat.

Ethnic violence has devastated the nation for decades and embroiled Burundi in a 13-year civil war ending in the Arusha Accords, but this conflict is political — aimed at preserving the Accords — and rally members represented all three of Burundi’s ethnic groups, Hutu, Tutsi and Twa.

“We are together. We want peace,” Ms. Niyindemesna said.

Wary of overstepping on the delicate issue of term limits, the United Nations, the East African Community and the African Union have not openly rejected a third term for Mr. Nkurunziza, leaving Burundians bereft of a declarative, international stance that could put an end to the turmoil.

Even with respect to prudent diplomacy, the UN could take two measures to strengthen its position in Burundi, Mr. Ndikumana said.  mFirst, it could recall the Burundian members of UN peacekeeping missions in other nations throughout Africa, such as Somalia, to stabilize the situation in their own country. Second, Mr. Ndikumana requested the UN replace its Special Envoy to the Secretary General of the Great Lakes Region, Said Djinnit, who resigned from his role as mediator earlier this month, with someone more knowledgeable of Burundian issues.

Algerian Diplomat Said Djinnit remains as the current envoy, despite having stepped out of peace talks amidst allegations of bias in favour of the ruling party.

A Burundian man at the rally, who wished to remain anonymous because he works for the United Nations, said the UN has been hesitant to take strong action against Mr. Nkurunziza because it would prefer a solution come from a local or regional level such as the East African Community or the African Union.

The Constitutional Court of Burundi, comprised of judges appointed by the executive, officially agreed to clear Mr. Nkurunziza to run. But Mr. Ndikumana said the judges were issued death threats if they would not vote in Mr. Nkurunziza’s favour. Two members, including the court’s Vice President Sylvere Nimpagaritse, fled the country because they would not vote under duress.

“[The decision] shows you are not free to express your option about political matters if you are in an institution such as a Constitutional Court,” Mr. Ndikumana said.

Because term limits remain a delicate issue in many African nations, a public, unified regional agreement about President Nkurunziza presents a political quagmire.

Regional diplomacy and political ambition has impeded the East African Community from scuppering Mr. Nkurunziza’s drive to stay in power. While Kenya and Tanzania have retained term limits, Uganda abolished them in 2001, and Rwanda’s Paul Kagame, slated to leave office in 2017, said he would leave the matter up to the people of Rwanda. The EAC has therefore called for dialogue and at least six weeks postponement of the elections but has not commented further.

“The EAC showed its weakness and lack of resolve into wanting to settle the Burundi situation.” Mr. Ndikumana said. “Some [EAC countries] don’t have any good lessons to give to Burundi in terms of democracy. We were not surprised.”

The Burundian UN employee was hopeful the African Union — which concluded its 25th Summit today — would pressure the president to step down. Analysts, however, were not surprised by a more lackluster position from the Union, especially as the continental body includes numerous countries that do not have or ignore term limits.

Gilbert Khadiagala, head of the international relations department at the University of Witwatersrand, told The Daily Nation leaders tend to “tip-toe around issues to avoid creating friction” and noted discussions of Mr. Nkurunziza’s third term ambitions “will have to politely ignore the fact that current AU chair Robert Mugabe has ruled Zimbabwe since 1980.”

As Burundians await more definitive action from regional governing bodies, international power players have pledged opposition to Mr. Nkurunziza appearing on Burundi’s ballot in July. The United States issued a statement denouncing Mr. Nkurunziza’s disregard for the Arusha Accords in April and has devoted $7 million to facilitate dialogue and monitor tensions and placed support for Burundian peacekeeping forces in Somalia on hold. The European Union suspended its elections observation mission until the situation improves.

Additionally, the Catholic Church in Burundi criticized the elections, and former UN Secretary General Kofi Annan of Ghana wrote on Twitter he believes Mr. Nkurunziza has lost legitimacy and should step down.

If the elections proceed with President Nkurunziza on the ballot, they will not be fair or democratic, rally participant Adnette Kamugisha said. Despite opposition in the streets of Bujumbura, farmers in rural areas are intimidated into voting for Mr. Nkurunziza, she said, some threatened with death.

“Ever since I was born, all I know has been war,” Ms. Kamugisha said.

Friday’s rally not only sent a message to the world that Burundians stand firm against a third term for Mr. Nkurunziza, the Burundian UN worker said, but it could also raise global awareness to grant some rally members statuses of asylum in the United States.

Burundians across North America have forged a strong community hopeful for peace, she said. Rally members hailed from cities such as Philadelphia, Albany and Toronto, but many knew each other from schools or other events.

Together Burundians chanted with remorse for the violence and hope for a new order in their country:

All photographs by the author.