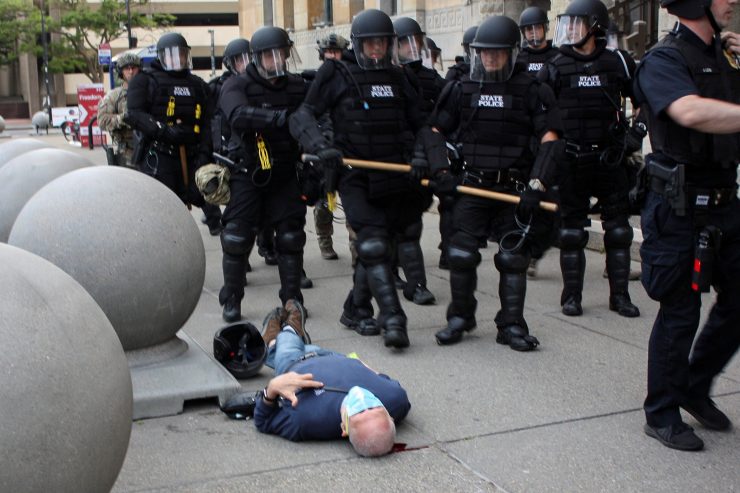 Watching the television footage of hordes of Buffalo police officers file past the 75-year old Martin Gugino, lying on the floor face down and bleeding from his ear, my stomach regurgitated bile. It was hard to imagine such fate befell Martin who is not even black. You know for a fact that this couldn’t possibly be the force who swore to protect and serve. This is no more the sporadic cases of rogue elements and bad apples that exist only in the fringes. The fringes are now mainstream.
When the two officers that pushed Martin down were suspended, the police department’s entire emergency response team, fifty-seven in number resigned from the squad in protest. Really?
Fact is, we all need to acknowledge the difficult job these officers do every day. It’s one thing for a doctor to cause injury to his patient by accident but it’s unforgivable for him to turn around and deny such patient the much-needed life-saving treatment.
In the age of Trump, no one takes responsibility anymore, you just double down instead. And so many police unions across America are starting to look like a state-sanctioned mob organization, paid for with tax monies but mostly out to protect their own in a manner reminiscent of the La Cosa Nostra – the infamous New York mafia.
While one may not necessarily blame it on all the everyday men and women in police uniform, the good ones who by the way are in the majority, are sometimes victims of a decadent system. After all, the early history of policing in the United States took the form of slave patrols in the 1700s and the enforcement of Black Codes and Jim Crow laws in the 19th and 20th centuries. The entire architecture of today’s criminal-justice system still makes it virtually impossible to hold law-enforcement to account.
The police institution has become a very powerful patriarchy that sometimes attracts elements of warped, sadistic minds. Instead of rooting out those dark forces, the institution protects them, simply moving bad cops to just another precinct.
Just one year after December 6th, 1865, the date of ratification of the 13th Amendment (the amendment that ended slavery) the southern states of Alabama, Texas, Louisiana, Arkansas, Georgia, Mississippi, Florida, Tennessee, and South Carolina established a new set of laws known as the Black Codes. These laws were specifically designed to get around the illegality of slave ownership. Under these codes, blacks could be arrested for “offenses” such as loitering, not having a job (vagaries) or even preaching about Jesus while black without a police permit. Those convicted could then be leased out to corporate establishments for cheap labor (peonage). This made the business of arresting Blacks very lucrative even back then, which was why hundreds of White men were hired by these states as police officers. Of course, certain things may have changed since then but you could understand the historical basis of police attitude towards black America. The force was created for use against them in the first place.
Police officers don’t face justice for a variety of reasons. From powerful police unions to the so-called blue wall of silence, from cowardly prosecutors to reluctant all white juries. Meanwhile, it is the Supreme Court of the United States that has continued to enable a culture of violence and abuse by invoking the opaque doctrine of qualified immunity, whatever that qualification means. And so, any attempt at a meaningful reform must be championed by the judiciary.
In the midst of a groundswell of calls for police reform in America, President Trump issued an “Executive Order on Safe Policing for Safe Communities.” The action coming from a pro-police president underscores the seriousness of the problem and an acknowledgement that things have to change. In summary, the Executive Order seeks to incentivize police departments that meet certain defined criteria believed to improve public safety. It however did not make federal funding conditional to those reforms. In order words, they will get a pat on the back for following through but will not be reprimanded no matter how ignominious or depraved their actions may be. Big speech, little action?
Thank goodness we are starting to hear additional conversations. The chatters are getting louder. From Chief Justice Cheri Beasley of the North Carolina Supreme Court to Chief Justice Bernette Joshua Johnson of the Louisiana Supreme Court, judges across America are saying, “We Are Part of the Problem They Protest”. The appetite for reform is gaining traction and hopefully the country will sustain the tempo.
In reality, meaningful reforms will require the help of all of us. This ranges from objectivity on the part of citizens called to exercise their jury duties, to police officers holding one of their own to account. Public awareness is also critical in this effort, if we have to put pressure on a system that lack the propensity to auto-correct. Like most systemic changes, this one too will take a village.
Whether we possess the bandwidth needed to reform the police to an all-inclusive force that protects whites, blacks and brown remains to be seen. But one thing is certain, America can no longer afford the luxury of policing as usual.

Dr. Osmund Agbo is the President/CEO of African Center for Transparency

Future of conservative media on focus

IS NIGERIAN ECONOMY KILLING ITS PEOPLE?