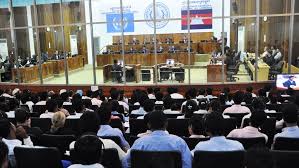 A potentially devastating scandal involving the president of the International Criminal Court (ICC), Judge Silvia Alejandra Fernandez Gurmendi, was brought to light in the July 3rd edition of London Evening Post. According to the article entitled, “ICC President in corruption scandal over Bashir,” Judge de Gurmendi received into her personal bank accounts “unexplained funds mounting to over $17 million that was allegedly used to bribe witnesses that enabled the ICC to indict” Sudanese President Omar Al Bashir.  The article goes on to allege that Judge Gurmendi received deposits wired over ten years from off shore financial companies; Barting Holding Ltd, Atlantic Corporation, Genesis International Holdings and Napex International, in amounts from $150,000 to $250,000 into her personal accounts at Banco Poplar in the Virgin Islands, First Caribbean Bank in the Bahamas, and the Congregation B’nai Israel.

Judge Gurmendi is alleged to have used these illicit funds to “recruit, coach and fake evidence and witnesses to testify against President Bashir.” Mekki Elmograbi, a writer from Sudan, asserts in his April 2012 three part series, “The Octopus Lawyer” that Dafuris were taken to Israel for “training sessions” in preparation for their testimony at the ICC.

However, this President of the ICC is not simply a judge of the court. Gurmendi actually devoted a portion of her career beginning in 1995 to drafting rules and procedures for creation of the Rome Statue in 1998, which established the ICC in 2002 Soon after, she joined the Office of the Prosecutor (OTP) working with Luis Moreno Ocampo in securing trumped up indictments against President Al-Bashir. The alleged bribery of Judge Gurmendi overlaps her tenure the OTP with Ocampo.

George Soros, a billionaire international financier/speculator and advocate for drug legalization, whose various Open Society organizations fund a global network of  NGOs, and

Lord Malloch-Brown, former Minister of State for Africa in the Foreign Office were instrumental in bringing the ICC into existence. Both Judge Gurmendi and prosecutor Ocampo have associated with various Soros created institutions including the Coalition for International Criminal Court, and the Open Society Justice Initiative.

The ICC has been rightly accused by African leaders as a racist, unjust and some say imperialist for its focus on Africa. In its fourteen year existence, out of nine investigations conducted by the ICC, all but one has been against individuals from African nations, including two sitting Presidents. The African Union (AU), led by Kenya, Uganda, and Ethiopia has been threatening to leave the ICC en mass for its targeting of Africa.  In the words of Kenyan President Uhuru Kenyatta: “The ICC has been reduced into a painfully farcical pantomime, a travesty that adds insult to the injury of victims. It stopped being the home of justice the day it became the toy of declining imperial powers.” A thorough and honest investigation of the allegations centering on the bribery scandal of Judge Gurmendi could have consequences concerning the legitimacy of the indictment of President Bashir, and force the AU to finally put the ICC out of its pernicious existence by African nations withdrawing their membership.

It is ironic that President Bashir, accused of responsibility for genocide, even though no evidence was provided to support the wildly inflated claim of the deaths of 300,000-400,000 people in Darfur, has been indicted and persecuted for years. Meanwhile Tony Blair, who was completely exposed in the recently released Chilcot Commission Report to have lied, and without cause launched a pre-emptive military invasion against Iraq that led to the deaths of millions; has not been charged with genocide and crimes against humanity.

Biden America in the eyes of Arabs