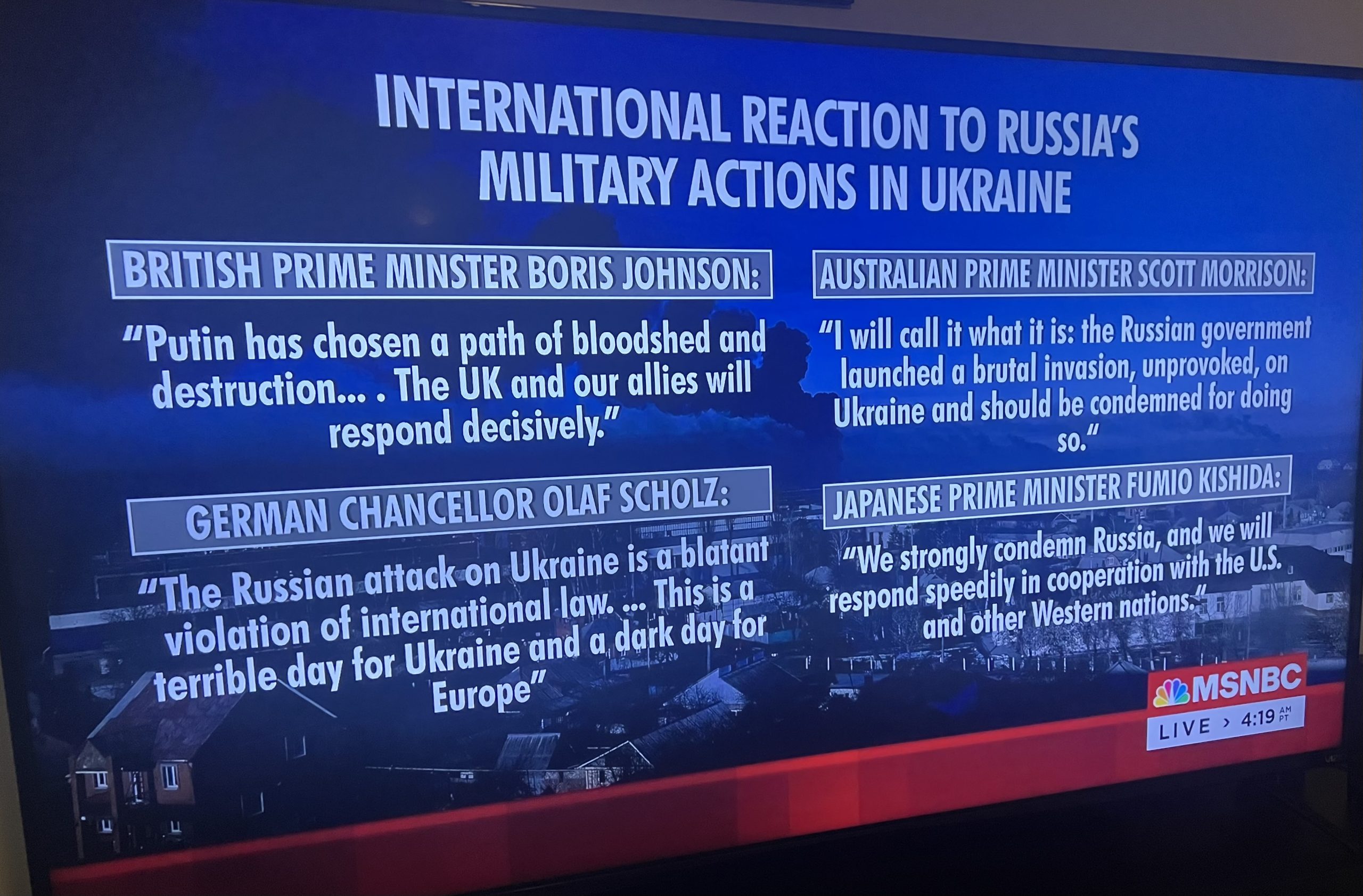 In a speech that launched the invasion of Ukraine, Russian President Vladimir Putin warned western
countries and the United States not to get involved in the war and reminded the world that Russia has
nuclear weapons. The United States President, Joe Biden responded in a speech to Americans and
described Putin’s decision to invade Ukraine – an independent country as a flagrant violation of
international law. “Putin is the aggressor. Putin chose this war, and now he and his country will bear the
consequences,” Biden said in a televised address to fellow citizens and the world.
The reaction of other world leaders was swift. Boris Johnson of the United Kingdom said: “Putin has
chosen a path of bloodshed and destruction …The UK and our allies will respond decisively.” The
German Chancellor Olaf Scholz insists “Russian attack on Ukraine is a blatant violation of international
law …and a dark day for Europe. Similar denunciations came from Australian, Japanese leaders and other
world leaders.
This is not the first time a country is invading another country with all the contrived reasons. The United
States invaded Iraq in 2003 because of Iraq’s unproven possession of weapons of mass destruction. The
opposition to the war was global just like the ongoing Russian invasion of Ukraine.

“In the fog of war, it is almost certain that Putin’s forces will violate Article five of NATO not intentionally but as war’s collateral damage. In the event of Russian missiles hitting Ukraine’s neighbors such as Latvia, Poland, Lithuania, Hungary, Romania, Slovakia, and others that are NATO members, the 27 other NATO members will invoke Article five and thereby attack Russia, sparking the unwanted third World War.

The difference with Russia’s expansionist adventure and Putin’s imperialist ambition in Ukraine is that
the opposition to the war by major global powers is likely going to launch the third world war. After
nearly eight decades of relative peace, this is the first time the world’s nuclear powers will likely confront
each other. When Putin reminds the world, his country got a nuclear weapon and President Biden
mobilized the support of every member of North Atlantic Treaty Organization – NATO, the world
unfortunately is in the cusp of another world war. Hear Biden: “There is no doubt, no doubt that the
United States and every NATO ally will meet our Article Five commitments, which says an attack on one
is an attack on all.”
In the fog of war, it is almost certain that Putin’s forces will violate Article five of NATO not
intentionally but as war’s collateral damage. In the event of Russian missiles hitting Ukraine’s neighbors
such as Latvia, Poland, Lithuania, Hungary, Romania, Slovakia, and others that are NATO members, the other
27 NATO members will invoke Article five and thereby attack Russia. A scenario where NATO
confronts Russia’s aggression will mark the end of global peace that has endured since the end of the
second world war and the formation of the United Nations. With Putin’s determination to recreate the old
Soviet Union and NATO’s opposition to the return to the old global order, the stage is set for open
hostility.
The fractures at the United Nations make the looming world war more imminent. The five permanent
members of the United Nations Security Council – US, UK, France, Russia, and China are divided on the
war in Ukraine – with democratic governments of US, UK, and France on one side and autocratic
governments of Russia and China on the other side. The five permanent members have veto authority and
make the resolution of any stalemate at the UN impossible. Can the UN – an essentially a peace-
supporting organization endorse war against Russian aggression? Either China or Russia will immediately
veto such a resolution or any anti Russia resolution.

Already, the Ukraine’s U.N. Ambassador Sergiy Kyslytsya has exposed a hole in the UN Charter that has the potential to dismantle the global body formed after the second world war. The UN Charter was never amended after the USSR broke up. It still references the Soviet Union as one of the permanent members of the UN Security Council. The Russian Federation just ascended to that seat after 1991. With Ukraine’s renewed demand for the documents (that don’t exist) that show that the Russian Federation was welcomed to the body by the UNSC and General Assembly, what becomes the future of the veto-wielding members? According to Ukraine, those documents don’t exist because the UN legal counsel made the call.

Is it possible that Ukraine’s effort to upend Russia’s membership of the UN veto club will come to fruition? While it may not work, it is fascinating to see how the ongoing war in Ukraine could unravel the present international order. Should hostilities in Ukraine ensnare other world powers as analysts predict, the world might be headed for complete restructuring between democracy and authoritarianism. Of late the world has seen the forces of division and authoritarianism mount an intense assault on the ideals of democracy, rule of law, freedom of expression, and self-determination.

Why is Africa silent in the ongoing Ukraine crisis? Could a restructured United Nations recognize any African country to be a permanent member of the security council? Why is Europe often the theater of wars that engulf the entire world (World war I and II started in Europe)? Is the third world war going to start with the Ukraine impasse? While there are no clear answers to these questions, what’s clear is that Putin’s delusional grandeur like Adolf Hitler has once more put the future of peace in the most uncertain terms.

Even more frightening is the latest report  that President Vladimir Putin has ordered Russian nuclear forces put on high alert in response to what he called “aggressive statements” by leading NATO powers. With the total ban of Russia on Europe’s sky, removal of the country from the international banking system, and unexpected resistance of the Ukrainian forces, Putin is facing total isolation that could make him frustrated and desperate. Will he use the nuclear weapon on his adversaries? If he did, it would be the second time in history after US dropped the world’s first deployed atomic bomb over the Japanese cities of Hiroshima and Nagasaki on August 1945, during World War II that killed a total 120,000 people.

The world faces a major test at this moment of reckoning. The ongoing battle in Ukraine  is not just for Ukrainians, it is a struggle for freedom, rule of law, peacebuilding, and democracy all over the world.

Dr. Uchenna Ekwo is the President of Center for Media and Peace Initiatives, New York Follow him on Twitter @UcheEkwo