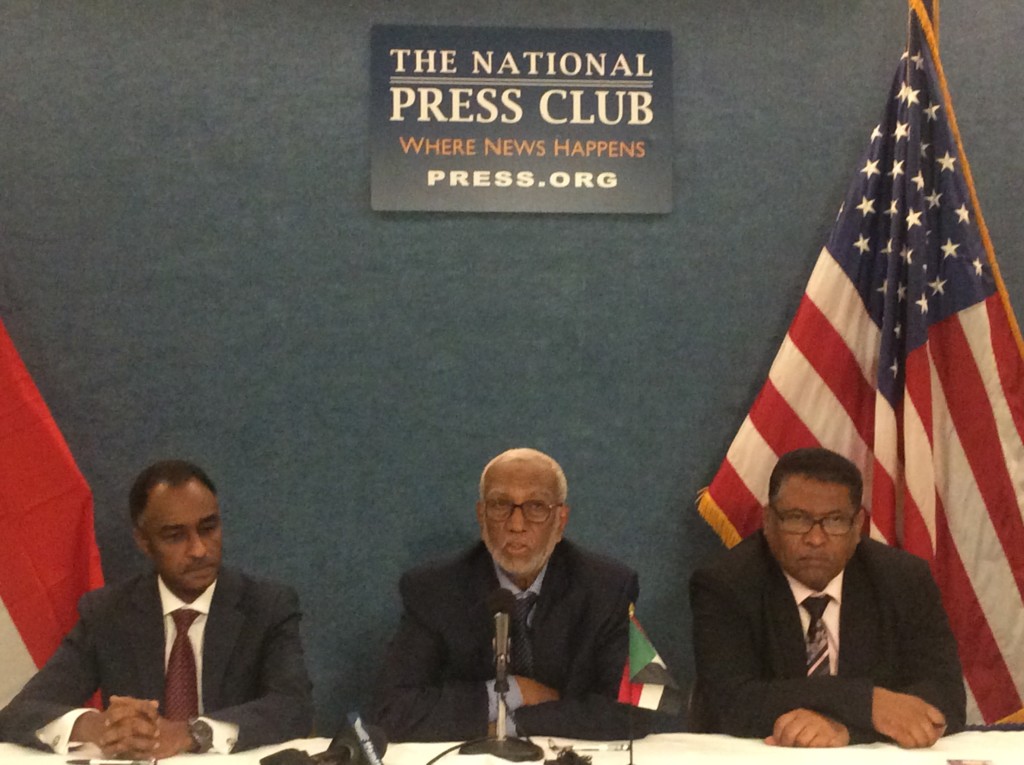 Notwithstanding its inclusion in Donald Trump’s travel ban to the United States, Sudan is determined to pursue friendly relations with Washington. The country’s diplomatic gear is in full force with the country’s Parliamentary Speaker, Professor Ibrahim Ahmed Omer leading a delegation of lawmakers to Washington in a renewed rapprochement with the new Trump administration.

Emerging from nearly 20 years of international sanctions, the government in Khartoum understands that cooperating with the United States will help to open its economy to the world. Sudan, an East African country has vast oil reserves that China is currently profiting from to the exclusion of other western industrialized countries.

Addressing newsmen in Washington D.C., Professor Omer, an eloquent English language speaker, took his audience down memory lane, pointing out that Chevron, an American company actually discovered oil first in Sudan nearly half a century ago. But, with prolonged economic sanctions against the government, American companies had taken a back seat in oil exploitation and exploration; a situation he hoped will change under the post-sanctions era.

He enumerated several investment opportunities in the areas of agriculture, mines, and technology where sustained US-Sudan relations could benefit not just the two countries but also the entire world.

Omer argued that while every country including United States has the right to protect its citizens in any way possible, the inclusion of his country among the list of banned countries to the US was not helpful in rewarding Sudan’s counter-terrorism efforts as well as in advancing US-Sudan relations.

In a response to a question, Omer acknowledged that the setback towards the country international image was as a result of negative information often churned out by the international media. To counter this trend, he emphasized the need for Sudan to improve its media system to encourage pluralism, access, and cooperation with other countries especially the United States.

In the mean time, said the lawmaker, Sudan is determined to come to the US more regularly to tell their stories directly through the American media in the hope that positive narratives about the Arab country can begin to take hold among American citizens, business and political leaders, as well as other members of the international community.

This is a smart move by Sudan – country largely isolated from the West for too long. Apparently, the leaders of the political reforms in Khartoum understand that the media can shape and influence images of countries. As a public diplomacy outlet it can ultimately generate public support for a country’s views and values abroad. In recent years, non-Western actors are becoming more and more proactive in communicating their views and values to global audiences, while also reporting about international affairs in accordance with their own governmental agendas.

In a speech, the newly appointed press attaché and media counselor to the Sudan’s Embassy in Washington, Mr. Mekki Elmograbi underscored the usefulness of global media in public diplomacy.

Mr. Elmograbi emphasized that Sudan was focused on making their country look attractive and friendly to foreigners while also setting the stage for others to understand its positions in the international arena.

“As you would imagine, my primary responsibility is to ensure that Sudan enjoys strong visibility within the media in the United States as well as project shared democratic values of rule of law, free speech, and transparency in governance”, the press attaché stated.

In this connection, he pledged to make himself available to journalists and civil society groups in the United States who might wish to tap his wealth of knowledge in their understanding and reporting of developments about African political economy.