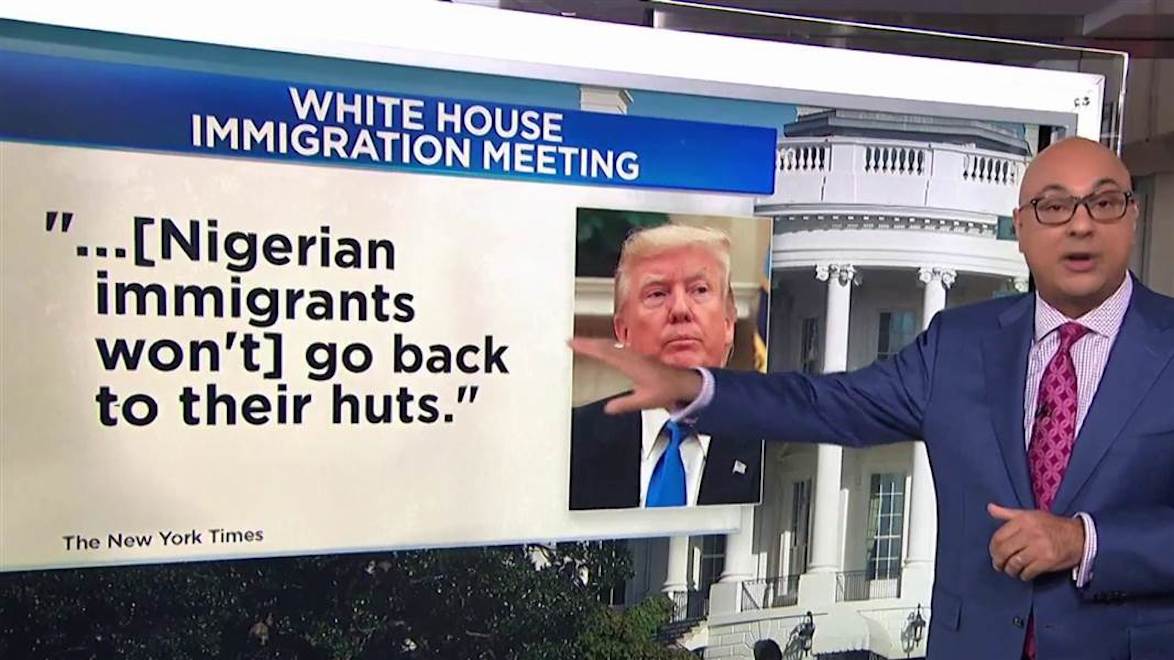 It is easy for Trump’s critics to label him as racist, narcissistic, ignorant, bigot, arrogant, misogynist, controversial, and suffering from intellectual disability and so on. Regardless of the opinion of his detractors, what is clear is that Trump is not stupid. For all that media and political pundits may say about his unconventional presidency, he has a solid base of support hovering around forty percent of Americans. He has developed a cult personality among that segment of the population while the remaining sixty percent does not have solid convictions of what and where they stand on issues. So, while sixty percent of the population is fragmented in their views on key national priorities, Trump’s base of forty percent doesn’t waiver and will forever support him “even if he shoots someone in 5th Avenue in Manhattan.” It is a captive slice of the electorate.

As condemnable as Trump’s recent disparaging comments about immigrants from Haiti and Africa may be, it is certain he was speaking the minds of his hardcore base. Make no mistakes; racism remains a serious challenge in America and Europe in private and public places. Railing against Trump for verbalizing what other politicians and private citizens say and practice quietly doesn’t solve the problem of racism in the world. It is possible that most of the people who criticize Trump are doing so because of his exalted position. It is “not presidential”; “it is beneath the office of the president”, “it does not reflect our values” are common attack lines.

The unfiltered nature of Donald Trump brings a moment of reckoning for America and the world. He says his mind the way he feels and that quality endears him to many of his admirers. While some accuse him often of misrepresenting the facts, Trump tells the truth when it is inconvenient for those who want to perpetrate obvious mistakes of history.

When President Obama was elected in 2008, the world hailed what was thought to be a post-racial America. As the first African American to be elected President of the United States, Americans and the entire black race was under the illusion that the end of racism was near. Instead, it was the beginning of the end. Ironically, Obama’s successor used his skin color to lunch his national political career by questioning Obama’s citizenship. For nearly four years. Trump raised doubts about the birthplace of Obama, saying publicly that he dispatched investigators to Kenya and Hawaii “and you can’t believe what they are finding”. From birther-in-chief to become commander-in-chief, Trump finally acknowledges Obama’s American citizenship after he clinched the Republican ticket for president. The unsual tactic worked for him.

However, Obama’s completion of two terms as president without a major scandal proves to Americans and the world that an African American, just like previous US presidents, can finish his job without quitting. He proved that all the stereotypes associated with black Americans are not entirely correct. The fact that Trump picked the baton from a black man inside the White House in spite of his negative utterances against immigrants provides a window of opportunity for America and the world to begin the process of racial healing. An unlikely alliance between Obama and Trump to tackle tough hateful and bigotted feelings that still exist in America could change race relations in the world for the good of all. A combination of Trumps captive base and Obama’s loyal supporters could form the initial army to minimize racism and hate that reared their ugly heads again under both men.

It may be too judgmental for anyone to conclude that Donald Trump is a racist. Does making racist remarks make the person a racist? Civil Rights Leader and former UN Ambassador Andy Young told Chuck Todd on Meet the Press, it doesn’t help to label people as racist while responding to President Trump’s derogatory comments about Haiti and African countries. He used a metaphor to convey his thought you don’t help to cure an alcoholic by constantly calling him an alcoholic; you have to cure him.

What Donald Trump and others in his mode really need is education. For example, when he allegedly said “Nigerians will not go back to their huts”, it suggests that he needs to visit Nigeria to see palatial houses better than the ones he sold in his real estate career. Perhaps, President Buhari of Nigeria should invite Trump on a state visit and so should other African leaders so that he can understand that Africa is not made up of “shithole” countries. The demand for an apology by the Africa Union might not change Trump’s opinion as much as personal contact with Africa.

The ignorance about Africa in America is palpable. It is not just Donald Trump. Too many Americans think that Africa is a country. In the US, the identity of foreign-born citizens is hyphenated with a certain country’s name; it is only the continent of Africa that is lumped into one pie. For example, there is Korean-American, Greek-American, Japanese-American, British-American, and Russian-American etc. But hardly do you hear stuff like Togolese-America or Kenyan-American etc. Instead, the African-American ethnic category lumps black Americans – Africans forced to come to the US and African voluntary immigrants into one group.

The importance of education to eradicate ignorance around racial relations could not be more urgent. In his 1994 autobiography, Long Walk to Freedom, Nelson Mandela said: “No one is born hating another person because of the color of his skin or his background or his religion. People must learn to hate, and if they can learn to hate, they can be taught to love, for love comes more naturally to the human heart than its opposite.”

Following Mandela’s counsel, it is totally defensible that Trump is not a racist (at least, Donald Trump told reporters last week that he is not a racist) because he was not born as one. Did he learn racist behavior growing up under pervasive racism in his youth? If he did, he must be taught to love and part of that training is educating him about the world, which as it appears he doesn’t have a firm grasp of other cultures. As his presidency matures, he is likely going to learn more about other parts of the world.

The avalanche of criticism following his utterances is instructive and indeed part of an education for a 71-year old man. A word is enough to the wise.

Dr. Uchenna Ekwo writes from New York. You can follow him @UcheEkwo

The War in Nigeria

US – Africa summit in pictures